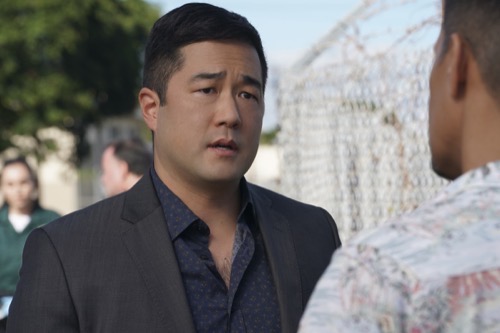 Tonight on CBS their reboot of the classic series Magnum P.I. airs with an all-new Friday, January 22, 2021, episode and we have your Magnum P.I. recap below.  On tonight’s Magnum P.I. season 3 episode 6 “Tell No One,” as per the CBS synopsis, “When a wealthy man hires Magnum and Higgins to find his missing wife, they are stunned when a tragedy occurs as a result of their investigation. Also, Kumu’s suspicion of her step-daughter’s boyfriend creates a divide with her and Kumu’s new relationship.”

Magnum ran out of gas again, Higgins and he are walking and she says she is not surprised. They are three kilometers to the nearest gas station. All of a sudden, they see a two truck pass them and the Ferrari is on it.

Later, Magnum and Higgins are at dinner, Kuma says the Ferrari is at the impound lot until Magnum can afford to pay the fine. Higgins refuses to pay the fine for Magnum. Kuma tells Magnum that she is suspicious of her Maleah’s boyfriend, he tells he is just nervous being with them.

Mr. Braggs walks into the bar, he hires Magnum and Higgins because his wife is missing. She has only been gone since the morning, and he thinks she is missing because this is not like her. She is not answering her texts and now her cell phone is off. They take the case and Higgins accepts double payment when Mr. Braggs offers it.

They begin with stopping by to see Leaf Braggs hairstylist, T-Lo. Higgins says she had an appointment in the morning, T-Lo says she was a no-show. Higgins gets a GPS alert for Leah’s phone, around the corner. They find a man who found the phone in the trash, he says it is his block, it gets pretty territorial around there. They show him a picture of Leah, he didn’t see her that morning. When he finds out that she is missing, he gives them her phone that he found.

Another call, the price went up to three-million and he has one hour and the instructions are changing, they will call back. Magnum asks him how fast it will take the get the cash, he says he has someone doing it for him. Higgins says he will have to drop the money alone, but they will be following them and they will get Leah. They pack the money in bags, there is another call with the instructions.

He makes the drop off, dumps the bags with cash on the ground and returns to his car. Then, a car pulls out of a garage, a masked man with a gun comes out with a gun and grabs the cash, the guy calls Braggs and tells him where to find his wife.

Rick is following the guy with the cash by car, and TC is following by helicopter. TC says the guy went into the tunnel, but he is not coming out. Rick is also in the tunnel, he has eyes on the car, the car is abandoned and the guy with the cash is gone, he must have had someone waiting for him inside the tunnel. Meanwhile, Higgins and Magnum find Leah, she is dead and there is a note on the floor that says you told.

Gordon is on the scene, Higgins tells him that the husband doesn’t know yet that his wife is dead. Gordon tells them it is not their fault, they just have to find the people responsible now. Braggs says he did everything he was told, he is second guessing Higgins and Magnum, he doesn’t want their help anymore, he tells them that they did enough.

Magnum is with Dr. Noelani Cunha and Leah is on the table. Magnum is surprised that he can’t see her roots because she didn’t go to her stylist. And, the maturity of the gunshot wound shows that she has been dead for more than eight hours.

Kuma goes to see Rick, she asks him for some advice regarding Muleah’s boyfriend, she got a bad vibe from him and she told her. She knows she is not her mother but she has this overwhelming feeling to watch over her. Rick tells her to let Muleah to make her own mistakes, that is the only way she is going to grow.

Higgins figures out that the photo of Leah is from months ago, the newspaper was just photoshopped into it. And, she knows where the photos was taken, so she heads there with Magnum. They find a bunch of bills that are for Frank Braggs, Colin’s brother. Seems Leah was thinking of divorcing Colin, she was seeing a divorce lawyer. Frank works for Uber, they find him there, they call him for a pickup. The two get in the car, and when they do they start asking Frank questions. Magnum says they know Colin cut him off financially.

And, Higgins tells Frank that they believe he was in on it. Frank crashes the car, then gets out and makes a run for it. They chase him and he gets run over by a pickup truck, and he is dead. Gordon says the found a burner in Frank’s car, but they need to stand down now and let them finish this. Magnum tells Higgins that Frank looked confused when they told him their theory.

And, how did Frank get always one step ahead of them. They go back to see Colin and Higgins tells him that he was Frank’s partner. Leah’s hair appointment was made after her death, by his computer. Colin tells him that it is a great theory, but they don’t have evidence. Gordon walks in and says they do, they found the ransom money and he is under arrest.

Muleah and Kuma meet in the park. Kuma apologizes and says she was trying to help and Kelvin is probably a good guy, and she wants their relationship to really be about them. Muleah says a few months after dad died, her mom went over to help her build a bbq and she lashed out at her. And now, she lashed out Kuma too. And, it means a lot that she actually said something.