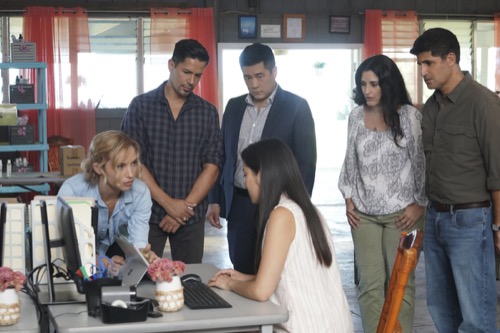 Tonight on CBS their reboot of the classic series Magnum P.I. airs with an all-new Friday, February 5, 2021, episode and we have your Magnum P.I. recap below.  On tonight’s Magnum P.I. season 3 episode 7 “Killer On The Midnight Watch,” as per the CBS synopsis, “When an overenthusiastic neighborhood watch group asks Magnum and Higgins to investigate a shady character living on their block, they are shocked to find that they may have inadvertently stumbled upon a serial killer on the loose. Also, Jin’s new money laundering business leads him to want to help a new friend.”

Tonight’s episode of Magnum is chasing a white SUV, TC is in the helicopter as well. The van stops and several men get out with machine guns and begin shooting – Magnum wakes up, it was a dream. Some time ago someone started following Magnum and they want him to know that they are there, he thinks that is what is causing the nightmares. He catches Jin laundering money because of the pandemic, people are afraid of the germs. Magnum tells him to make money honestly, it will make him feel better.

Magnum shows up at the bar, Higgins introduces him to Penna and Maui they run the neighborhood watch, they think their neighbor is a murderer. Two nights ago, professor Roland bar pulled a woman out of his trunk and she couldn’t walk, and as far as they can tell, she hasn’t left the house. Everyone they care about lives in their cul de sac. Magnum and Higgins go see Gordon, he says he knows that watch, they call in a lot with false alarms. Magum and Higgins take the case, they head over to see the professor. They see his car and look in the trunk, find a blanket and take it to see if there is any DNA on it.

Jin is in the laundry mat, he flirts with a woman, who leaves and then puts his cash in a bag. He notices that the woman left something behind and rushes out. Then Jin goes to see Magnum and says he met his soulmate and she left behind a sock. He needs to find her, and wants Magnum to find her so he can return the sock. The sock is engraved, from a hotel in the city, Magnum tells Jin maybe she works there. Then, Magnum gets a call, there was DNA on the blanket, it belongs to an Asian woman.

Magnum head over to the professors house, Maui and Penna says he went out and they watch the house, so Magnum and Higgins can sneak in. They find one guest room with a mattress on the floor and zip ties. Higgins checks the computer, there is a photo of an Asian woman, she is bruised and the photo was taken the day before. Maui texts Magnum, the professor is back.

Higgins and Magnum hide in a closet, Higgins texts Maui and Penna and tell them to create a distraction outside. Meanwhile, the professor hears a noise, it was an incoming text but as soon as he is about to open the closet door he hears glass smashing and runs outside. The professor runs out and finds a whole in his windshield. It gives Higgins and Magnum enough time to get out. They call Gordon, he tells them that they need more evidence to be able to bring the professor in.

Jin stops by the bar, he has a briefcase full of cash. T.C. and Rick tell him that he is going to need a bodyguard. Jin tells them that his soul mate works at a hotel and they won’t give him her phone number, Rick offers to help.

Penna calls Magnum and tells him that the professor is taping up the window and is getting ready to go out. Magnum asks him to tail him, they will meet up and take over. Higgins gets a text, the blanket had blood, opiods and sedatives in the DNA, and there were four women’s DNA on it. Magnum speeds up, they plan on pulling over the professor and detaining him until Gordon can arrive. Magnum calls Gordon he says he is on his way. They hear banging coming from the trunk, Magnum opens it and there is a woman inside.

The professor says he is not a murderer. He was trying to save the woman, she was transported to the island as a sex worker. He says the other women he was trying to help as well. He say the scratches are because the women don’t know who he is.

The police arrive, they take the professor and the woman. The professor tells Higgins and Magnum to check it out, they will see that he is telling the truth.

Jin finds his soul mate, she is raising a ten year old, her grand-daughter, her mother is in rehab. She says it has been tough, but when family is in need, you press pause until theirs is back on track. She thanks him and he leaves.

The woman who was in the trunk, her name is Minh, she was hiding from the bad man. She says the man who was driving the car saved her. She came from Vietnam on a work visa, for the promise of a job but she was forced into a life of prostitution. She would still be locked up in the scary house had the man not saved her.

She doesn’t know where it is, she is not from there and she was drugged. Magnum tells the professor that his story checked out. He tells them he has the address where the scary house is. The cops head there and they find nobody, when they realized Minh was missing they left.

The professor tells Magnum and Higgins that two of the women headed home but one is staying at a non-profit where he works at – they are going to check it out.

Jin tells Rick and TC that he found his woman and she is down on her luck.

They head to Freedom House, the girl speaks English and refuses to go home until her sister is also freed. She gives Magnum and Higgins a street name and from Google earth she is able to identify the house. Higgins does a little more research and they find the place. The cops go in and make some arrests but Magnum and Higgins see a guy running with a girl. Magnum tells him to set her free and he will put his gun down.

The guy won’t do it, but Higgins comes from behind and distracts the man and they are able to put him down. Meanwhile, the girl picks up Magnum’s gun and she is about to shoot her abducter, Magnum tells her not to do it and Higgins talks her down. So many young women were rescued and the two sisters were reunited.

Jin returns to see his lady friend, he tells her that he started a new business and he is already in the black. He hands her an envelope with cash, he says he wants her to have it. Jin then goes back to the bar, he says that he gave all his profits to his lady friend and he is full of pride.