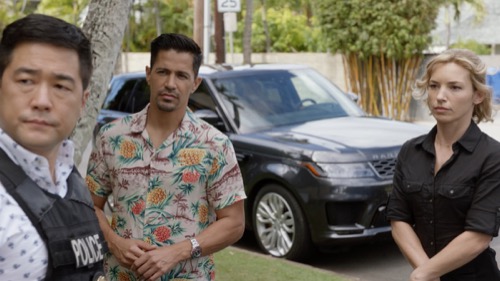 Tonight on CBS their reboot of the classic series Magnum P.I. airs with an all-new Friday, April 16, 2021, episode and we have your Magnum P.I. recap below.  On tonight’s Magnum P.I. season 3 episode 14 “Whispers Of Death,” as per the CBS synopsis, “A psychic hires Magnum and Higgins to prevent a murder she claims to have foreseen. Also, Katsumoto questions Kumu when her information is found on recovered stolen jewels that once belonged to the infamous Imelda Marcos, and Higgins struggles with whether or not to tell Ethan the truth about her past.

On tonight’s episode of Magnum P.I., the episode begins with the police finding a bag in the woods, it is full of expensive diamond jewelry. The officer goes back to the station and tells Gordon, a driver ran a light, the cruise tried to pull him over, and unfortunately he got away, no plates on the vehicle. There is also a note in the bag with Teuila’s name on it.

Magnum and Higgins are enjoying wings at the bar with TC and Rick when their client arrives. The client’s name is Sylvia, she tells them she hasn’t much time, there is going to be a murder tomorrow afternoon and she needs their help stopping it. She is a psychic and she had a vision of her client, Megan McGrady being murdered by her husband. Magnum tells her they will take the case, she says she sees fortune in their future.

Gordon calls in Teula and tells her that there was 1.1 million worth of jewels in the bag and her contact information. She says she has no idea why, but she has seen the tiara before, in 1986 when she met Imelda Marcos. She tells Teula that she needs her if she is going to make a name for herself, people need to know that she is more than a show collector. Teula turned down the job. After that day, Teula never went back.

Back at the bar, Teula tells everyone about Imelda Marcos offering her the job. Higgins walks in and gives Magnum information about Megan and her husband. Magnum and Higgins leave, she tells him this is a total waste of time, Megan doesn’t have a life insurance policy. Magnum tells her they follow Megan around for a day, make Sylvia happy since she paid them in advance. Megan’s husband catches them outside and Magnum tells him that his wife loves the house and was wondering if it were for sale. Gordon calls Magnum, saved by the bell. Gordon wants to know how well they know Sylvia, Higgins tells him that she is their client. He notifies them that was, she was just murdered.

Higgins and Magnum go to Sylvia’s house, Magnum tells Gordon that Sylvia had a vision of a murder and she hired them to stop it. She thought one of her clients was going to murder by her husband, but so far nothing. Two shots to the chest, someone didn’t want her to survive. Magnum sees a notebook, he takes picture of the two pages that are opened, it has the name of her clients with three digits beside each name.

Magnum and Higgins go back to the office and do some research, they find that there are a lot of negative comments about Sylvia online, and all were coming from the same IP address. They head to an address, and speak to a woman, who is another psychic, she tells them it is not her, she has an alibi. She says she did the nasty reviews because clients were leaving her for Sylvia. She goes on further to say that if Sylvia knew as much as she did about her clients, she had to be spying on them. Magnum says that maybe she was spying and somebody didn’t like it.

Magnum and Higgins go back to Sylvia’s house, he remembers that she talked about the crystals that she believed in and she would give them to clients. Magnum smashes one of them and finds a listening device inside. She actually heard Megan’s husband say he was going to kill her. They head over to Megan’s house and bust in, they can’t find her anywhere, her cell phone is on the kitchen table. Magnum says it looks like she and her husband Matt left in a hurry.

Teula speaks to Rick and TC, she thinks it was a cousin of hers, Maui Uni, who stole the tiara, he was there that day and acted funny. If she wants answers, she can’t be the one looking into this, she asks them to do it.

Gordon rushes into Megan’s house, he tells Magnum that they need to find Sylvia’s recordings and get more information to help them find Megan. They check her cell phone records and find a number that she calls often. They hack into it and there really isn’t much to go on. Higgins manages to run the message through an audio app, they don’t think Matt is going to kill Megan, they think he is going to kill someone else. Gordon calls them and says they ran Matt’s DNA, he is linked to other murders, they think he is actually a hitman. But according to the feds, he hasn’t been active in the last three years.

In another part of the island, we see several police cruisers with their lights and sirens going, they are closing in on Matt’s cell phone signal, they arrive in a wooded area, there is nothing but dirt roads and cow pastures.

Rick and TC go to see Maui Uni and he doesn’t want to talk to them, they think he has something to hide. TC got some footage from a friend of a city road cam, it turns out that Maui Uni’s nephew stole the jewels from him.

Magnum and Higgins find Megan, they tell her that Sylvia was murdered and they believe her husband did it. In fact, his DNA has been linked to several other killings. Megan says this can’t be, she is devastated. She says she loves Matt, how can she love him and have no idea who he is. Higgins tells her that Matt lied to her because he wanted to hold on to her. He wanted to erase his past, and couldn’t.

And now, she can help them save a life. She tells them that this morning he said he had to leave the country, he booked this room so they could meet once he was done. She overheard him on the phone, this woman, he said her husband and son wouldn’t be around because they are on a submarine tour. It doesn’t take long for Higgins to find on her computer a family of three, where the father and son are booked for the tour, they find the target, she is a defense attorney.

Gordon and his team arrive just in time to stop Matt from killing the woman. Megan asks if she can have one minute with Matt, Gordon says ok. Matt is taken away, Megan is upset.

Teula knocks on Maui Uni’s door. She asks him what happened to them, he says they grew apart. She tells him that he pulled away, they didn’t grow away. He tells her that it was so hardback in the day, and seeing that family living in a mansion and not having to worry about anything. He didn’t get caught for stealing, but he was so ashamed. He would pawn a piece here or there when he needed money, he didn’t want her to be disappointed in her, so he just stayed away. She hugs him and tells him that it is ok.

At the bar, Higgins and Magnum are sitting down enjoying a beer, he asks her how she is doing. She says she was thinking about Matt and Megan.