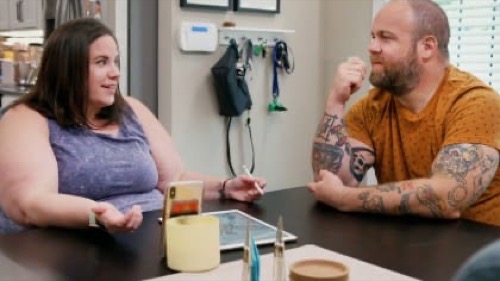 In tonight’s My Big Fat Fabulous Life season 8 episode 9, “The Buddy System,” as per the TLC synopsis, “Wary of being alone in Charlotte, Whitney convinces Buddy to move in with her. With Buddy’s new girlfriend taking up his time, however, she finds herself lonelier than ever. When Buddy moves too fast in love, will it all blow up in their faces?”

Buddy moves fast. He was barely in a relationship for more than a week when the two started calling each other boyfriend/girlfriend as well as using the “L” word. Buddy was asked if he loved his new girlfriend. He didn’t say yes only he didn’t say no either. He also was clearly lying when he said he hadn’t told his girlfriend he loved her and so Whitney said he couldn’t tell her anything about moving too fast. Her relationships were now off the table. She had never used the “L” word for a three week relationship and even if she does in the future – Buddy couldn’t say anything against it because he did the exact same thing. Buddy is in a committed relationship and he was happy.

Whitney was happy that he was happy. She even liked girlfriend. The only problem she has with the relationship is that its making her thinking of her own situation. Buddy’s new relationship made her realize that she couldn’t depend on him as much as she was used because now he has other priorities and she found out she was otherwise lonely without him. Whitney didn’t really branch out in Charlotte. She hasn’t made any new friends there and its only now that she realized how lonely she was. She didn’t feel like this before when she was with Chase because Chase helped her forget how bad things were. And now with Chase out of the picture and her best friend Buddy busy in a new relationship, Whitney is back to feeling “isolated”.

It also didn’t help that the coronavirus has forced everyone indoors. Whitney couldn’t go out to meet new people and she ended relying on video-chats with her friends to combat the loneliness. One friend ended up bringing up Ryan. He didn’t like nor trust Ryan and he didn’t want to be around Whitney if she was going to be around Ryan. This goes especially for pandemic times because a few people noticed that he wasn’t taking the coronavirus seriously enough. This one friend told Whitney that she should rethink her relationship with Ryan. She hadn’t known Ryan all that long before they went into business together and it was Whitney that was bringing the money in. She was a well-known face while Ryan was just dressing. She could replace him with anyone.

Ryan also happens to be Chase’s best friend. Chase broke Whitney’s heart by cheating on her and then getting another woman pregnant while the two of them were engaged. Now, that the engagement is over, many was hoping that would be the end of their connection to Ryan as well. Whitney knows her friends don’t like Ryan and she’s doing her best to deal with it. She has had a lot of time to think since this whole pandemic thing. She asked Buddy to move in and she sees him less now that they’re living together than before. She’s pretty much on her own. She’s lonely and she’s still sad about Chase. She later cut out and/or destroyed the photos of her with Chase because she didn’t want a reminder anymore of that past relationship.

Whitney cut up the photos. She also set them on fire with some help from Buddy and Buddy came to believe now is the time for Whitney to leave Charlotte. She came for the work. Which she could do from anywhere and really the only thing left in Charlotte was Ryan. Buddy wasn’t a big fan of Ryan’s. None of Whitney’s friends were fans of Ryan and they all seem to believe he was using her.
Whitney didn’t think that, but she did grow concerned about Ryan flying to Nashville just to go to a party with his friends and so she wasn’t in no rush to see him or workout with him. She has other friends she can workout with. She has Jessica. Jessica was both a friend in helping her focus on fitness and a friend with whom she can talk to.

Again, Buddy wasn’t really someone she can rely on anymore since he started his new relationship. Buddy spends most of his time with Brittany and it was vey rarely that Whitney saw him. Only that all changed. Buddy and his new girlfriend later broke up. They broke up because she didn’t like how close Buddy and Whitney are. It seems she’s brought up how much he takes care of Whitney and how she had wanted it to stop. Brittany thought Buddy would choose her over his best friend and she was wrong. Buddy wasn’t going to stop or even pretend to stop caring for Whitney. The two of them are super close and Buddy turned to Whitney after his relationship ended. He told Whitney that he thought he was in love with Brittany. She had seemed like the one and he wasn’t young,

Buddy is thirty-six. He was too old to be moving that fast in a relationship anyways and he quickly realized that once it ended. Buddy told Whitney about it. She commiserated with him and the two somehow came to an agreement to get matching tattoos together. They already have matching tattoos as it is and so now they were talking about getting their second one together. They also called their friend Heather to see if she wanted to join them in getting a tattoo except she said she was good. Heather will not be getting the duck or goose tattoo that they were talking about. She also was sad that Buddy’s relationship ended, but he told her that no, he was happy that ended because Brittany turned out to be a nightmare.

Also, Buddy doesn’t want to stay in Charlotte. He came for Whitney and now he wants to convince Whitney to move again. Whitney hadn’t known that Buddy didn’t like Charlotte. She feels he was more pretending to like it when he had a girlfriend and so that’s when Buddy said he didn’t plan on moving fully. He told Whitney that it was just supposed to be for a short time. A temporary thing and that made her upset because she thought he would have moved permanently for the girlfriend, but not for her. And she also didn’t want Buddy to go because she couldn’t handle being on her own right now.