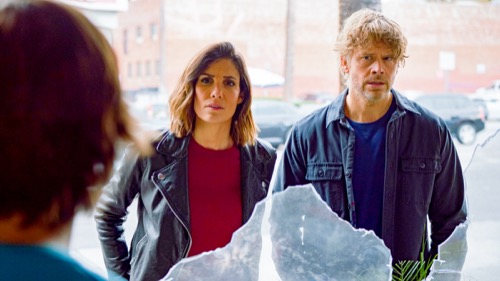 Tonight on CBS NCIS: Los Angeles returns with an all-new Sunday, February 14, 2021, season 12 episode 10 called, “The Frogman’s Daughter” and we have your weekly NCIS: Los Angeles recap below. On tonight’s NCIS Los Angeles season 12 episode 10, as per the CBS synopsis, “When Sam’s daughter, Kam (Kayla Smith), is kidnapped after leading citywide protests, he will stop at nothing to find her. Also, Deeks rejoins NCIS and Callen’s search for answers about Anna.”

Sam’s daughter Kamran otherwise known as Kam was in town. She came to visit her father because she wanted to tell him something and she never got a chance to say it. Kam was taken. She was kidnapped by a man wearing a mask. Which isn’t unusual in this day and age and this man threw her in a cell. She was being kept in an old fashion prison cell. She also wasn’t there by herself. The other cells were also occupied by other young adults and the others started to demand their phone call. They thought they were in a regular prison where they have rights. Like being able to call their parents or at least a lawyer and unfortunately they were “told” very early on that this prison cell isn’t official. The kids were kidnapped by a group of masked men who drugged and kidnapped them for a purpose that Kam didn’t know just yet. She just knew she was being held against her will.

Kam being kidnapped also forced her to miss her usual check-ins with her father. Sam has this rule where his kids have to call or contact him after a certain set of hours once he called them and Kam missed that deadline. She wasn’t anywhere near a cell phone. Her father grew concerned when he hadn’t heard back from her nor was she replying to his text messages and so he started looking for her. He called her school. He asked around with her friends. Sam got nowhere with either of them and so he turned to his own tech team. He wanted Eric to use federal technology to check up on his daughter. This was technically illegal because it wasn’t involved with a case and Eric knew this. Eric tried to deny Sam’s request.

Eric and Sam were arguing about it when Roundtree came in. Roundtree was told what was happening and that Sam’s daughter Kam wasn’t replying to texts and so he sided with Sam. He helped convince Eric to check on her. They weren’t going to track her down. They were just going to check on her cell service to see if she had a problem with returning calls. Eric looked the information up and he found out that Kam’s phone is offline. There was no reason for a young woman’s phone to be offline. Kids these days were basically attached to their phones and so that scared Sam. Sam’s fatherly instincts were telling him that his daughter was in danger. He wanted to drive to San Francisco and investigate what happened to his daughter, but again Roundtree was the voice of reason.

Roundtree reminded Sam that it’s better to do these things with help. The men turned again to Eric and Eric went digging into Kam’s life. He found out Kam was in LA. He had her friends checked out. The only person in her life that had a record was this cute boy that she seemed to be interested in and so Sam dragged Roundtree to this poor boy’s house. The kid did try to run when Sam announced he was a federal agent. Only he didn’t make it very far and he knew who Sam was immediately after he heard Kam’s name. The young man was Kam’s boyfriend. Logan and Kam have been seeing each other and she probably didn’t tell her dad about it because Logan does have a record.

Sam didn’t like finding out his daughter had a boyfriend. He felt it was Logan’s fault that his daughter was keeping secrets from him and so he did try to frighten the kid. He brought him to the boatshed. He questioned him about Kam’s whereabouts and he refused to listen to Logan. Roundtree had to step in. He understands why Sam was scared and was taking it out on the kid, but it wasn’t the kid’s fault and so Roundtree took over. He questioned Logan. He found out that Logan got his record because he was arrested at a police protest and that Kam was in town because the kids were going to another protest. They took Kam’s car to come to LA. She told him that she was going to see her father and so she dropped him off before continuing on her way.

The protest they wanted to join was being organized by a group called Students for Humanity. Kam was a part of this group and she butts heads with another member. This other member was named Zee. Zee and Kam got into an argument when they last saw each other and it did not end well. Other members of the group think that he may have thrown a brick through their window to scare off people who didn’t agree with him. Zee was also one of three people who knew where the petty cash box for the organization was at Students for Humanity and he grabbed the gun while he was at it. Zee was a radical. He thinks they should get violent to make an impact and he didn’t want to be respectful like Kam suggested. Kam wasn’t a hardcore radical. She just wanted to protest for change.

Yet, Kam was kidnapped for her beliefs. The people that took her kept saying she didn’t deserve rights because of all of the protests she does and they tortured her as well as the kids that were locked up. Kam had been taken by counter-protesters. Meaning Zee wasn’t guilty and so Sam was wasting time tracking him down. Callen even returned from his trip early to help. The two of them found Zee making bombs and they arrested him before he could actually use those weapons on people. They later questioned Zee about Kam. He was also shown footage of her kidnapping because they got security footage of it and he told them he had nothing to do with it. The last time he saw Kam was when they were arguing over peaceful protest.

The team checked. They couldn’t find a link between Zee and the kidnappers and so they chose to believe he had nothing to do with what happened. Only, they weren’t in the blind either. They later learned that two other members of the protest group had been reported missing. The team quickly remember everyone who had a problem with the protesters and so their chief suspects became police officers plus anyone else who would have a grudge and that’s when they found out about the Sandmen. It turns out there used to be a gang within the sheriff’s department called the Sandmen. The Sandmen operated like any other gang as in they did a bunch of illegal crap on the side and so the only difference was that they were protected from consequences.

They also would be the most ticked off group about the protests. The Sandmen didn’t like people fighting against police misconduct because they thrived on that and so the team tracked down two of its members. It led them back to a warehouse where they found Kam. Kam was fighting back in a bid to escape and so Sam came at the right time. He rescued his daughter and the two other kids. He also took the time to chastise Kam for breaking the rules. She got a car without telling him and she started to date someone without telling him. Kam apologized for breaking the rules but she wasn’t sorry and she still wanted to go to the protest and she even asked her father to come with her.