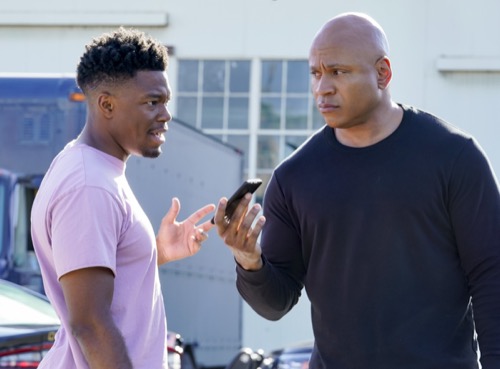 In tonight’s NCIS: Los Angeles episode, Callen and Kensi are in a high speed chase in a hearse when they are forced to stop. Several men with guns get out, circling around the hearse.

8 Hours Earlier – Sam works out before heading to meet Callen in D.C. Meanwhile, Callen tracks down a woman named Angela. He needs to know about an ex of her’s, Kate Miller. Kensi and Deeks squabble over him butting into other people’s business.

Angela finally stops and talks to Callan. Her ex was toxic and she finally got free. Callan tells her that Kate is not who she says. She is a Russian National named Katya who did time in prison. Callan needs to find her. Angela doesn’t want to help.

Kilbride finds Fatima calling about apartments at work. He needs her to focus on their new case involving missing weapons they have taken over from the ATF. A prime suspect was located by the ATF but he has since been found dead. They video with Sam and Devin. They need to locate their new target after a man named Sivac was found dead prior to getting the truck.

Deeks locates the target’s step mother. She was estranged from him, she shares. Meanwhile, Callen and Kensi head to the morgue and take a look at what was left behind by the dead involved in the case. One of their victims has ink on their wrist. They need to figure out what it is to figure out what lead to his death.

Sam and Devin visit a man who drove the weapons truck. He tries to run. He tells them he has PTSD. After they cuff him he admits to turning a blind eye to a man taking the weapons after their initial thief didn’t call. Fatima locates a stamp that matches their vic’s. He was at a night club before his death. Soon enough they have camera footage from the club. They see his step mom was their. She tells Deeks she was trying to talk him out of the weapons sale.

Sam and Devin track down the man who called their trucker after Sivac died. Meanwhile, Callen speaks with Sivac’s step mom. She brings him to Sivac’s funeral. Deeks and Kensi are working undercover their. They learn Sivac has a step brother and he most likely killed him for the guns. He sees Deeks and Kensi and knows. It seems his step mom tipped him off. He runs.

Callen and Kensie end up on a high speed chase in a hearse. Sam and Devin locate the warehouse with the guns. They fight two men guarding them. Meanwhile, Deeks pops up in the back of the hearse. They didn’t know he was there. He jokes he was trying to mind his own business.

The step mom appears to have had Sivac murdered. They pull her in. Deeks questions it. She doesn’t feel bad. She wanted her money. Later, Callen sees Angela again. She wants to help. She gives him a key to a safe deposit box belonging to Katya.