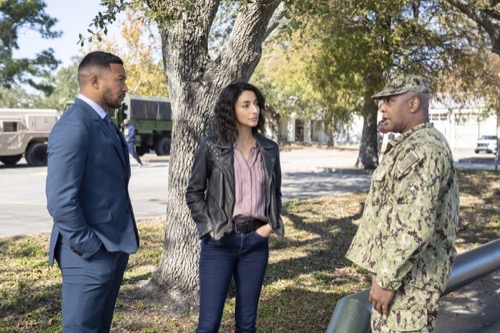 Also, Carter’s mother confronts him when he refuses to talk to the FBI for a background check on her behalf, and Sebastian starts to form a bond with a key witness who was hit hard by the COVID-19 pandemic.”

Lt. Commander Amanda Gregson was found murdered in an alley. She was a Navy therapist at Belle Chase and suspicion quickly turned to the person who found her. Fiona Devlin was a street performer who followed a sound from the alley. She found the body and she called 911. However, the reason she’s being regarded with suspicion is because she fled the scene before the cops could get there.

Fiona hadn’t waited to be questioned and she didn’t even give her name when she called for help. The team was only able to identify her because they traced the call back to a cell phone owned by one Fiona Devlin. There was just one Fiona Devlin in all of New Orleans and so the team went looking for her.

They tried her last address. Fiona has since moved from there and no one knows where she went. The team turned to tracing her cell phone which indicated that she was under a bridge. Fiona was sleeping in her car that she had parked under a bridge and it was Gregorio and Sebastian who woke her up. Fiona has been living in her car since the lockdown.

She lost her job and she had nowhere else to sleep. This is also why she ran. She couldn’t reveal she was sleeping in her car because she didn’t want it to get back to Child Protection Services and this could further ruin her chances of getting her daughter back. Fiona thankfully wasn’t a threat to anyone. Something that both Gregorio and Sebastian quickly picked up on and so they instead asked her what she saw or may have heard the night she found Gregson.

They were off getting answers from her while Dr. Wade was revealing her findings to Pride. The Medical Examiner performed an autopsy and she found a date rape drug in Gregson’s system, but there weren’t any signs of sexual assault or any attempted assault. She was still performing her autopsy and so Pride passed on the information to his team.

He sent Khoury and Carter to Belle Chase to get information on their victim. She was a well-respected therapist and a lot of people turned to her for help. Gregson had access to government secrets because of this. Khoury and Carter came to believe that she may have been killed for what she knew and so they didn’t think this was about rape at all. They thought it was about National Security.

They were also told that Gregson wanted it for protection. Gregson it seems had been threatened at work by someone on a motorcycle and this person busted up her car windows before they left. There was footage of it. The footage revealed the identity of the sailor and it turns out he was going to Gregson for couple’s therapy with his wife Laura. Laura was also in the Navy. She has access to classified information like long-range tactical drones.

Laura and her husband Bruce have serious problems. Their problems mostly stem from Bruce’s anger issues because he yells and breaks things whenever he gets upset. Only he doesn’t harm people. He just lashes out and he broke the car windows because he found out his wife Laura was seeing Gregson on her own. Laura didn’t mean to go behind his back. Gregson had reached out to her and asked her to her privately.

Carter had his own opinions. He also had his mother to contend with because she came down to see him and she wanted to know why he hadn’t made himself available for the FBI. The FBI wanted to question Carter about his mother. His mother is nominated for an important position within the Navy and to get that job she has to be cleared for duty. But Carter didn’t want to help with her nomination.

He also convinced his brother not to help as well and so Lynette Carter came down to New Orleans to find out what was going on with her middle child. She demanded to know why he wasn’t making himself available to the FBI. Carter told her he was busy with work and he didn’t want to explain himself because he said his mother will always think the worst of him.

Carter fobbed off his mother. He didn’t tell her the real reason was because he was protecting his brother. His brother had just gotten into Annapolis when they went out for drinks to celebrate and his brother crashed the car. Carter took the blame at the time. He got the DUI and weeks later a traffic camera photo was sent to his house that showed the truth. It showed his younger brother was driving.

Now, Carter knows he’ll be asked about that DUI. He either maintains the lie and get called out for lying to the FBI or he tells the truth and risks his brother’s career in the Navy. Carter was stuck. He didn’t know what to do and he also knew he couldn’t turn to his mother. And so he was derailing her nomination in order to protect his brother.

His brother was deployed. He was now out of the way and still Carter didn’t know what to do. Carter later told Khoury the truth. The two talked about it and Khoury realized what a tough position he was in, but she had no idea how to help and he didn’t know what to do either. They just chose to focus on the case. It turns out it wasn’t a coincidence that the date rape drug was used on Gregson.

Gregson had been helping a victim of sexual assault and she and a co-worker deployed unusual methods to help get victims justice. It wasn’t vigilantism only it was close. Gregson had gone through the proper channels the first time a patient had ever reported sexual assault and it ended with the victim being demoted and then later discharged.

Gregson learned her lesson from that. She never went through the proper channels again and she coded all sexual assault cases with a WBY in her case files. Once the team figured that out, they were able to determine that ¼ of Gregson’s files were sexual assaults and that the perp from one of these cases had killed Gregson for getting too close. Gregson and her own team didn’t go through proper channels. They used unconventional methods to get these rapists out of the military. She was doing that again when a man hunted her down and killed her to stop her from ruining his career. And if they did that to her, what will he do to his victim who reported the sexual assault?

The team did some digging. They were able to find the name of the victim. Her name is Emily Tascioni and unfortunately she’s missing. Her house looked like she cleared out in a hurry, but Khoury thinks Emily could have been targeted and now they had to find her before she was killed.

Meanwhile Sebastian was so moved by Fiona’s story that he got her a job, housing, and had asked Rita to defend her in court to get her daughter’s back. Fiona and her daughter were later reunited. And its all thanks to Sebastian.