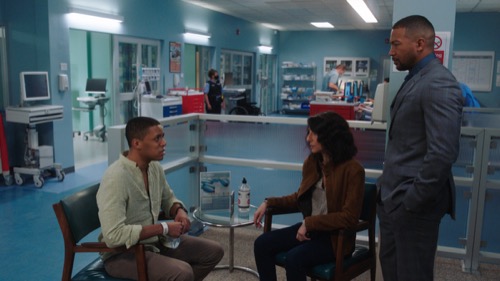 On tonight’s NCIS Nola episode, Pride and Rita were getting married. They were getting married now because his mother’s condition is improving and that wasn’t a great sign for someone with Alzheimer’s disease. The improvement was usually a sign that the patient was at their end.

Therefore, Pride wanted to celebrate with his mother one last time before she goes and he wanted his whole to be there as well. He even invited Connor. Connor had been told the truth about his mother from his mother and so he was lashing out right now. He was staying with Pride but he didn’t really want to be there and he had to be careful about going outside. Connor was at risk of getting swept up by his mother’s enemies. There was also risk from the FBI.

The FBI has been following Connor around. Pride spoke to Special Agent Lee and she said she was following Connor because he was the sole reason Sasha Broussard hasn’t left town yet. Pride still told Lee that his son was an innocent party. Pride later visited his mother and he thought he would be breaking the news about Connor to her only she already knows about him. She found out about Connor from Laurel.

Laurel could never keep a secret from her grandmother and so grandma is interested in meeting her grandson. She didn’t even mind when she was told he was moody and emotional. She said that he sounded just like his father. Pride had been a handful as well and so his son was just taking after him.

Pride’s team was investigating someone. They were looking into Naval Lieutenant Morgan and why he flew into town with a man using a fake passport. The other man claimed to Erik Ahmaud but who turned out to be Faisel. His father was someone big in the Syrian government and other Syrians had been in town to see a forger. The forger was someone old enough to be someone’s grandma.

Yet, in spite of her age, she did a runner and both Gregorio and Sebastian had to chase her down. The forger’s name is Sammy. Sammy was willing to talk to save her own skin and so the team was handling everything when Pride’s life took a turn. His son Connor was arrested for bombing his bar. The FBI had actually arrested him to get close to his mom and so they were just using Conor as a means to an end.

Sasha tried getting her son a lawyer. She couldn’t do it because her assets were still frozen and so Rita stepped up to the plate. Rita agreed to represent Sasha. She knew Sasha has something stored away for a rainy day and so they were going to use that to get Connor out of custody.

Connor was arrested for firebombing Pride’s bar. Pride didn’t press charges but he was a federal agent and he had been at the scene when the bomb happened and so it was considered a threat to a federal agent’s life. Connor really did need his own lawyer. Rita got him one as she represents Sasha. Sasha of course did not make things easier and so Rita asked her to show what she has. Sasha has this thing she calls pandora’s box and in it is information to take down the biggest mob families in the southeast.

Rita was looking at the stacks of evidence while the team had found Morgan and Faisel. The two weren’t together because they wanted to carry out a terrorist attack. They were together because they’re in love and to be gay in Syria is a death sentence. It’s why Morgan helped Faisel escape Syria.

The two of them wanted to start over somewhere new. They found out about a forger and she gave them the tools to a new life but then they got detained by NCIS and their situation doesn’t look good. Morgan broke several laws. He abandoned his post and he bought forged documents for him and his lover. Morgan was guilty of several crimes. His arrest did get out and Faisel’s father wants him back in Syria. He probably wants to honor kill him over there and so the team stepped in to help.

Only it was too late. The Syrian government had reached out to the American one and they were demanding their return of Faisel Suleiman. His father the general wants him back. He was leaning on the Secretary of State and they immediately went to an immigration judge to sign off on the deportation. The speed of which was so fast that it created a rip.

Faisel’s rights were infringed upon and so they needed to investigate this rip before his deportation could be processed. Faisel’s boyfriend Morgan spoke with both Gregorio and Khoury. He told them what Faisel had been doing in Syria and they were hoping they could trade on information to get Fasiel to stay in the states. It was a bit like what Sasha did to get her son freed.

Sasha turned on people she’s known for years. She gave information about them to the FBI and so they later released Connor. Connor was so happy to be free that he agreed to play guitar at the wedding. He and his Uncle Jimmy were carrying supplies when a group of guys jumped them and they almost kidnapped Connor before Jimmy managed to stop them.

Jimmy saved the day. He stopped the kidnappers and yet they’ll be back. Sasha was offered a witness protection program and she turned it down because she didn’t want to walk away from the life she knew and so maybe this will make her reconsider.

The team later found a loophole for Faisel to use. He can now stay in the States by giving up information about Syria’s government buildings and so he was in the clear and, while Morgan had his own stuff to deal with, it didn’t matter deep down because now he can be with the man he loves.

And Sasha and Pride eventually talked about the incident in their son’s life but Sasha said she changed her mind about WitSec and she was taking her son with her into witness protection program.