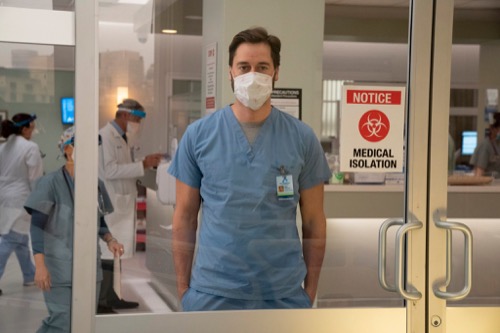 Tonight on NBC New Amsterdam airs with an all-new Tuesday, March 2, 2021, season 3 episode 1 premiere called, “The New Normal,” and we have your New Amsterdam recap below. On tonight’s New Amsterdam season 2 episode 18 as per the NBC synopsis, “New Amsterdam is still reeling from the pandemic as a plane crash lands in the East River; when investigators come to interrogate the flight crew.

Iggy fights against the clock to help the pilot uncover the truth; Max tracks down scarce medication.”

New Amsterdam is still dealing with the effects of the pandemic, the medical staff are exhausted, people are dying and are treasuring the time they get to be with their loved ones, makeshift medical units are being constructed outside the hospital and we see Dr. Kapoor, he is on a ventilator.

Lauren is in the hallway when Iggy comes up beside her, he got himself a sandwich when she asks him if he is taking that into the meeting. Everyone is heading into the meeting, Max tells them that he is proud of them, they are tired and hurting, but things are starting to turn around, Dr. Kapoor is getting off his ventilator.

And, he is committed to fixing the cracks in there. All of a sudden, the hospital starts shaking, they go outside and see a plane very close, then watch as it crashes into the East River. Everyone heads back into the hospital. Survivors are coming in, and they are working fast to try and save people.

Max comes through a doorway, Nelson Payne is there, he is the lead investigator from the NTSB. He says he is there to investigate and speak to every crew member, and they want to start with the pilot. Max asks Iggy about the pilot, he says he is catatonic, it’s not that he can’t talk, it’s that he won’t. Max goes over to see him and he finds the pilot just staring into space.

Max finds out that Dr. Kapoor was not taken off the ventilator because they ran out of medication. Max bumps into the NTSB again who says that he thinks the pilot may have been intoxicated. Max reminds Nelson that the pilot is a patient first and Nelson tells him that he is blocking them from a key witness. Meanwhile, Iggy is in a room with the pilot, trying to get him to talk, he tells him that he can help him, but he has to start talking. The pilot says he doesn’t remember anything, he was having a manic episode, nobody knows, he is bi-polar.

In surgery, they smell anti-freeze near the co-pilot, maybe he was contaminated in the crash. Then, Lauren is talking to the team about the cases.

Max calls Bill, he asks him if he can get him propofol, everyone is out and he needs it. Bill doesn’t have it. Max hears shouting, he goes to investigate and it is Nelson again, this time he has a federal order and he wants to see the pilot.

Iggy is speaking with the pilot still, asks if he took his meds in the morning, he says yes. The pilot says four years ago, he realized he was controlling the whole world with his mind, and that is when he was taken to the hospital. But, it wasn’t about his delusion, he grabbed a gun from an officer and pointed it to his head, what if this is what he was doing again. He thinks maybe the plane crash was him trying to kill himself.

Max tells Iggy that they need to find his patient. In surgery, Shin makes Helen take the lead, she is a little nervous, but she does it. Shin gives the orders to save the patient and asks Helen to stick around. Meanwhile, Lauren is attending to a patient, but she made it worse by doing something that she wasn’t supposed to.

Iggy is with his patient, in the supply room and he knows the NTSB is after him. Iggy asks the pilot why do jets dump fuel, patients were doused with it. He says if you were to land early, you would dumb the fuel. Iggy tells him that he was trying to save the plane, he dumped the fuel. The pilot says it crashed, it is his fault. Iggy says that the river could have looked like a landing strip, and he landed in the place that would cause less damage.

Max is still trying to get his drug, nobody has any to share. Nelson tells Max that they have recovered the black box. Shin and Helen are washing up, she is washing her hands excessively and he tells her that he thinks they are clean. She says she can’t do this and leaves.

Max, Iggy are with Nelson, they listen to the recording. The flight data recorder tells them there was a last-ditch effort to pull the nose up before they crashed. The co-pilot is a hero, while the pilot is clearly out of his mind. The pilot is taken from the hospital by NTSB.

Max gets an update on the patient, the co-pilot is delusional, so Max goes to see her. She keeps saying Hawaii 660, Max runs outside and catches up with the pilot and the NTSB. He asks the pilot what Hawaii 660 means, he says it was a plane that crashed a year ago. The pilot saved those passengers by what he did, he is a hero.

Max finds his drug and manages to help out a lot of the other hospitals by putting them all in contact with each other.

Max is outside the hospital, just taking in some fresh air when he hears people cheering outside. He gets a page and runs, Dr. Kapoor is awake. Everyone is so happy to see him open his eyes. The damage to his heart is bad, he will need a nitro valve and even if they found the best surgeon in the world, they don’t know if they can save him. Max calls Floyd.