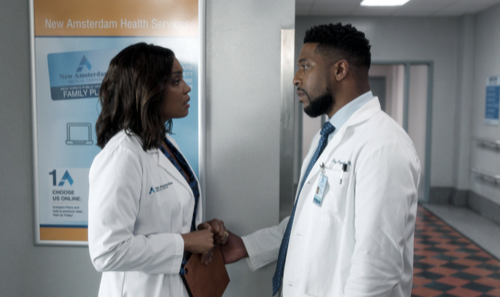 Tonight on NBC New Amsterdam airs with an all-new Tuesday, November 23, 2021, season 4 episode 10 called, “Death Is the Rule. Life Is the Exception,” and we have your New Amsterdam recap below. On tonight’s New Amsterdam season 4 episode 9 as per the NBC synopsis, “As Max and Sharpe prepare to depart for London, a deadly superbug hits the hospital and draws them back in; Leyla confronts Bloom about the secret she’s been hiding; Iggy digs deep to help grieving parents confront the reality that their son is gone.”

In tonight’s New Amsterdam episode, Max gives everyone special, well thought out gifts. He waits for them to be thrilled but they aren’t. Floyd finally tells him why. They don’t want gifts they want him to stay.

Iggy interviews a new candidate. He hits on Iggy who is speechless. Meanwhile, Malvo tells Floyd it is too complicated for them now. Leyla has discovered Lauren donated thousands to secure her a residency.

Max meets up with Helen. Hey is sad about leaving, she is excited to head off to London to start their new life. Max realizes he needs to return his beeper. It starts beeping. They have 9 codes at the same time. Later, the team meets. Thee 9 patients have the same bacterial infection that is being transmitted through direct contact. Helen and Max show up. They want to help.

Iggy sits and tells two parents there son Kaelen is dead. He contracted the material infection. They think its all a joke. He assures him them it isn’t.

The CDC comes in. Its one guy who is young. He tells Max he is very competent. He reviews the bacteria and tries to kill it with heavy duty antibiotics but it grows.

Helen and Max and some of the team try to track down the movement of the infection through the hospital. Lauren learns Walsh has been diagnosed with it. Meanwhile, Iggy has to show Kaelen’s parents his body. His dad punches him.

Max thinks he has a solution but that doesn’t work. They are running out of supplies and solutions. Meanwhile, Kaelen’s parents fight and blame one another. Max wants to try antibiotics that are off the market. They have tried every else.

Some of the team talk about Walsh and his habits. He puts ice in his coffee. This gives Helen and idea, the ice machine. They test it and realize this is their source. Max wants to use a drug from the 1950s that damages kidneys. They can dialyze the patients. Walsh asks to be the first, their guinea pig. After the treatment he is unconscious but comes to a time later. Lauren is so happy.

Iggy sits with Kaelen’s parents. He thinks they can really understand one another because they both feel the loss. They need to turn to each other and embrace grief. They need to talk. That is how they will survive this.

Max doesn’t know how to tell Helen he doesn’t want to go. Iggy calls and hopes Trevor, the man who hit on him. Malvo tells Floyd she is pregnant. Leyla is still angry that Lauren tried to buy her. She leaves her standing outside the hospital.

Max leaves with Helen to the airport.