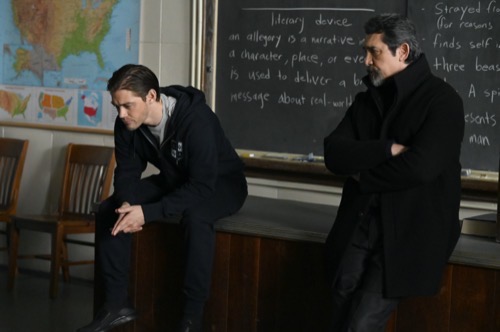 Tonight on FOX their new crime franchise Prodigal Son airs with an all-new Tuesday, January 26, 2021, episode and we have your Prodigal Son recap below.  On tonight’s Prodigal Son season 2 episode 3 called, “Alma Mater,” as per the FOX synopsis, “When the headmaster of Bright’s alma mater is found murdered, he is forced to face a secret from his past.

Jessica struggles with her decision to end things with Gil; Martin grows closer to Friar Pete; JT eagerly anticipates the birth of his baby.”

Martin has escaped and got sneaks in the house, Jessica is thrilled to see him and wants to have sex. His son is sitting in a chair, and he is quiet and he says to Martin this is not real, it is not going to be that easy. All of a sudden Martin is in the room alone with Malcom who tells him that it is a pathetic dream, an illusion.

Malcolm is up, and gets a call from his father who asks how he slept, Malcolm says he didn’t. Martin says they should have another session. And if they can’t talk feelings, they can at least talk murder, Malcom says he doesn’t have a case. Just then Gil walks in and tells Malcolm they have a case, Martin is excited and says to put him on speaker, Malcolm hangs up on him.

Gil tells Malcolm that there has been a murder in Westchester at Remington Academy. Malcolm says he doesn’t want to go back to the boarding school where he narrowly escaped, Gil asks what if he needs him. Malcolm says he will consider it, only if the victim is the headmaster Nathanial Brumback, Gil says it is his luck day.

They arrives at the school, the kids are in lockdown. He is lying dead near the pool, with the contents of his office in the pool. Edrisa is in the pool looking around, she hasn’t found anything yet. Malcolm says Brumback had a lot of people who didn’t like him.

Malcolm thinks back to 2005 when he was having a conversation with his dad and told him he was changing his last name. Martin wishes him good luck.

Gil and Malcolm meet with professor Delaney, the board has chosen him as interim headmaster. There are 127 students, or suspects. Delaney tells Malcolm that his mother has assured the board that this case will remain discreet. Malcolm is surprised, Jessica walks in. She says her family helped build this school, she can’t have this tracked back to her. Malcolm says they need access to the headmaster’s records.

Malcolm and Delaney leave the room, Gil asks Jessica what she is doing there, the last time he saw her, she told him to go away. She says this is business and she hopes they can keep this professional.

Malcolm is looking down one of the hallways, Dani is there, and looks shaken, he thinks back to when he was put in a storage room – his hand is shaking. He tells her that years after his father’s arrest, he started getting tremors. Then she asks him if something happened to him there, he says Brumback expelled him and put his name in his little black book. He heads to the pool to see if he can find the black book, he is standing by the edge of the pool when his hand starts shaking again and he falls into the pool. He swims around to find the book.

Martin is talking to his prison mate who says he heard that he wants to talk exodus. Martin asks why he should help him, since he is the smartest one.

Students start to show up at Brumback’s class, Malcolm walks in, he is wet. He turns around and says hello, he says that he is going to be their profiler today. He found Brumback’s black book. And, he also saw it when he went to school there. The book is reserved for expulsion level of offences, and their names are in it. He asks who wants to go first. Louisa says she was in his office, but she did nothing wrong.

Molly says Brumback caught her smoking pot. Anton says there was a problem with two girls that he is dating. They all leave and Malcolm says they are hiding something. His mother walks in and says those students are innocent. Gil tells Jessica to stay out of his case. She says she is on the board of trustees and all these kids come from impeccable families. Malcolm says so was he, and he was expelled.

Edrisa is in one of the classes and opens a fridge that says Physics Club, there is water in it and she takes one. Behind her is Anton, Molly and Louisa who tells her she is in the wrong place at the wrong time, and punches her in the stomach.

Later, at the station, Adrisa tells Gill and Malcolm that the three were acting like she was stealing a microscope. Gil says Delaney told him the school doesn’t have a Physics Club, these kids are up to something and it’s off the books. Malcolm is holding the water bottle, he notices something under the label, the three are cheating. Malcolm says they don’t bring in Louisa, the brains, they get Jessica to go to speak to her. Jessica tells Louisa that she knows about the cheating, Louisa says she needed a little help, but then he said he would out her if she didn’t work for him.

Malcolm goes to see Delaney and tells him that Louisa named Anton as the ring leader, they are there to arrest him. Malcolm thinks back to when Nicky Covington locked him in a closet in the school, he asks Delaney who told him his real name. Delaney tells him to leave it, he doesn’t need to solve anything. Then he tells him his dad did it, he called the school. Malcolm hears a helicopter overhead and runs outside.

Malcolm returns to see Delaney and tells him that he confronted his father who denied that he called the school. Delaney says it is sad that he is lying to him. Malcolm says his father didn’t lie, he is. Delaney says he should get a lawyer, shouldn’t he.

For over twenty years, Delaney gave kids the answers, he was running the cheating ring. Malcolm finds the same poison, on Delaney’s desk, that Brumback was poisoned with; he says he uses it to restore books. Malcolm says he knows that he killed Brumback.

Meanwhile, Dani finds Anton and Molly is with him, they say they ran because they were afraid for their lives.

Delaney hits the floor, he had just eaten a sandwich and tells Malcolm that Louisa made the sandwich. All of a sudden, we see Louisa at the door smiling, she has locked Malcolm and Delaney inside. She tells Malcolm that she is not some rich kid cliché. She says they call her a legacy there. He tells her that running away won’t solve anything, she will still be her father’s daughter and a killer, Delaney is dying and when the air dries up, he will die too.

She says he shouldn’t have come back, she is sorry. He says he gets it, he killed somebody too. He never told anyone the whole story, how he killed Nicky Covington by emptying his inhaler, punching and kicking him, and when he needed it, it was empty, he died. This is the real reason why Brumback expelled him, he sensed it. He burns one of the books, the alarm goes off, and Luisa runs, Gil is there to arrest her. She tells him it is just a senior prank, she pulled the fire alarm. And, he really didn’t kill Nicky, he called for help, he just wanted to get inside Louisa’s head.

Martin is still working on his plan for the exodus.