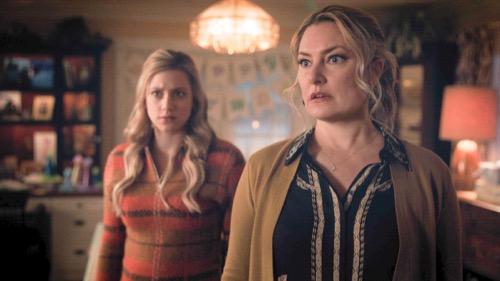 Tonight on CW their drama Riverdale airs with an all-new Wednesday, March 31, 2021, season 5 episode 10 Finale called, “Chapter Eighty-Six: The Pincushion Man,” and we have your Riverdale recap below. In tonight’s Riverdale season 5 episode 9 as per the CW synopsis, “Archie is caught off guard when his former Army general shows up with some unexpected news.

Jughead’s unconventional way to get through a case of writer’s block causes Tabitha to be concerned for his safety.”

In tonight’s Riverdale finale, Jug and Tabitha get caught up in closing the diner, dancing and laughing. They kiss and then separate awkwardly. Betty and Glenn talk about the lonely highway. He has agents out walking the area. Betty wants to be out there but tells her to hang back. She needs to focus on her father. Betty doesn’t know why, he’s dead. Meanwhile, Ronnie calls Chadwick to tell him he needs to sign their divorce papers.

Jug gets a call from his editor. He wants him to work on a project Jug isn’t too happy about. Cheryl checks her maple tress and sees her trees are not producing. She tells Nana who believes it is the curse. Hiram and Reggie plot to take over the groves as they search for a valuable metal within the prison walls.

One of Archie’s Army superiors arrives in town to tell him he has been nominated for the Silver Eagle medal. Archie doesn’t want it but his superior isn’t taking no for an answer. Archie doesn’t feel right about the whole thing as it was a questionable mission he was on.

Reggie shows up with roses for Nana. He wants to talk about her groves. Meanwhile, Betty and Alice are decorating cakes for Polly’s kids. They get a call there has been an accident. Jug and Tabitha talk about their kiss. Jug shares he and Betty had a bad break-up a while back and then he went on to have writer’s block. He tells her how he did maple mushrooms then and feels like they may help him now. He needs to unlock a few things. Tabitha thinks this is a bad idea when he tells her he wants her to watch over him as he plans to do it again.

Ronnie tells Archie she needs to go and see Chadwick. She needs closure. She once wished him dead and now she needs to put this all behind her. Back at Alice’s, she and Betty talk to the twins. They push a classmate down the stairs for saying Polly is dead.

Cheryl comes home to discover Nana has sold the groves. She is angry but Nana thinks this is great. They will get rid of the curse.

Archie gets a call from a reporter who shares she is looking into a mission he was on and wants to know about his General. She believes something dirty went down. Betty is at dinner with Glenn. He wants to meet the twins. He believes they may have the serial killer gene passed down from their grandfather. Betty is angry. He is writing his dissertation on her family. She slaps him before leaving.

Archie visits his Uncle Frank to tell him about the medal. His uncle tells him inside the prison something is brewing. He can feel it.

Cheryl visits Hiram and Reggie. She tells them Nana was declared senile a while back. Their contract is null and void. Hiram tells Reggie he better fix this. At the diner, an old flame brings Jug his shrooms. Tabitha steps in and calls herself his girl when Jessica asks to take one last trip with Jug.

Ronnie arrives to find Chadwick setting up a candlelight dinner. meanwhile, Jug eats the shrooms Tabitha has added to a Pop’s cheeseburger. Ronnie and Chadwick dance after dinner. They kiss.

Hiram has his men blow a hole in the side of the prison. Many prisoners escape. Charles and Chick head to betty and Alice’s. Across town, Reggie lights the groves on fire. Charles and Chick share the news of the blast at the prison. They came home and want to be married. Alice was preventing ordained online as a minister and they want her to do the honors,

At the school for a meeting, Archie is attacked by two escaped inmates. He heads back to see his sergeant, Kevin, and more to tell them. They are being held hostage by another prisoner. Archie takes him out. He tells them they need to barricade all of the doors. Minutes later, Uncle Frank shows up. He has learned Hiram has paid the inmates to trash the town.

Alice is in the middle of marrying Chick and Charles when Glenn arrives. Betty reveals that Glenn is writing about them. Charles pulls a gun on him. He wants to play a game. He tells Juniper to stab Glenn. Betty pleads with him. Charles tells her she needs to stab Glenn then. She accepts. She stabs Glenn and then throws the knife into Chick’s chest. She tries to turn on Charles but he heads for Alice. They wrestle about his gun. She shoots him.

Jug hallucinates about Betty. She apologizes for their break-up before they kiss. Meanwhile, Cheryl’s mom arrives from prison. She tells them about the blast and the fire. She gets them all to pray to divert the fire.

Ronnie discovers Chadwick hasn’t signed the divorce papers. He confesses to making several bad investments and one involving her business. If he signs he can testify against her. He needs time.

Archie confronts his superior about how he feels like there was a cover-up behind the mission he completed. He won’t cover it up. He calls Ronnie. She tells him she has to stay in New York for a few days. He isn’t happy.

Reggie reports back to Hiram. Cheryl won’t be able to sell the groves. Hiram is happy. The prisoners also destroyed the high school and it won’t be able to reopen for weeks. Tabitha checks on Jug. He isn’t there. She sees a trail of blood. Betty gets a call Glenn is all right and will survive. They relocated the case however further up the highway. But she still plans to investigate.