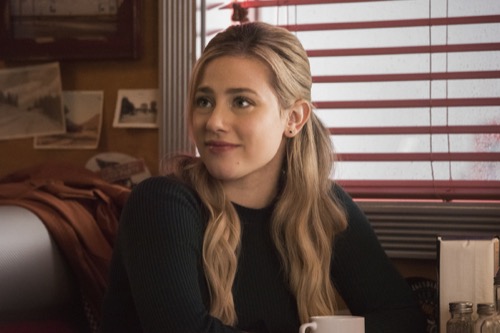 Tonight on CW their drama Riverdale airs with an all-new Wednesday, February 10, 2021, season 5 episode 4 called, “Chapter eighty: Purgatorio,” and we have your Riverdale recap below. On tonight’s Riverdale season 5 episode 4 as per the CW synopsis, “After spending seven years away from Riverdale, Archie (KJ Apa) returns to find the town is now under Hiram Lodge’s (Mark Consuelos) grip and on the verge of becoming a ghost town.

When Toni (Vanessa Morgan) catches him up on what’s been going on, Archie reaches out to the rest of the gang to return home.

Archie is in the midst of battle. He runs for his life from gunfire. He sees his friend Reggie drop. As he rushes to help him,. He sees Cheryl cheering, Betty and Veronica, and the others cheering for him. He suddenly sees Hiram with a gun, pointing it at him. He wakes in a sweat to his army superior. He is sending him home. He has given them 7 years. He is ordered to return to his old high school to reactivate the ROTC program.

The next day, Archie says goodbye to a friend before heading to Riverdale. Hours later, it’s night. He arrives at Pops. He sees no one he knows. The waitress tells him to head downtown for something strong if coffee won’t do. He does, arriving into a dark club. Toni is singing on stage. She is pregnant. She owes the place with the serpents.

Archie sits with Toni, telling her how Riverdale feels weird. She agrees. He asks about Pop. She looks afraid to say. Meanwhile, Betty is running through the woods. She heads to see her shrink after. She tells Betty she has been through enough. She needs to take it easy. Later, she runs her recent theory by an FBI colleague who offers to get pizza and beer with her. She turns him down, saying she has plans. She heads home to eat alone, having flashbacks while looking at crime scene photos.

Betty goes to therapy the next day, while she asked about her time in captivity with a killer her phone rings. Its Archie. She decides to head back to Riverdale for a few days.

Veronica is having dinner with her husband Chadwick. Later, Veronica works her job selling jewelry. Her husband calls. He knows she has been lying. At home later he asks her what she has been doing. She needed an edge, she tells him. She misses Wall Street and since the accident things have been the same for them. He thought they were going to get pregnant. She leaves to visit her mom on the set of her housewives show. They talk about babies and her and Chad.

After going home to Chad, he and Veronica make up. At work the next day she sells the jeweled egg he has given her. Archie calls. She answers with excitement and worry.

Jug meets with his agent after fighting with his girlfriend. He has writers’ block and couldn’t even get the reporter job he wanted. He heads home to try and write. His gift is on her way out. She is leaving him. He heads to the bar. There he meets a fan. He takes her home. In the morning, he finds out she slept with him so she would read her novel. Debt collectors pound on the door. They make a deal. Archie calls.

Archie hangs out at the club with Toni, Sweat Pea, Kev, and more. They talk about the past and Cheryl. Cheryl has been staying to herself with her Nana at Thornhill. She thinks she is cursed. She painted a portrait of Toni and then sent it to her. She never heard from her again. Archie asks more about town and how it has changed. Toni plans to show him.

The next day, Toni shows Archie the fire station. It’s abandoned. The town is pretty lawless, they have one chief. Buses don’t come by anymore. Sketch Alley is now Skid Row. Hiram ruined it all. Toni shows him an area that will become a turnpike leading to Sodale, a rich development Hiram is creating. Archie sees his house next, now overtaken by thugs.

He heads to Pops with Toni. The gang is there but it isn’t a warm reunion. Archie tells them Riverdale is dying and they need to save it. Across town, a young 21 years old nicknamed Squeaky catches a ride with a trucker. She is hoping to get to San Fran for a fresh start.