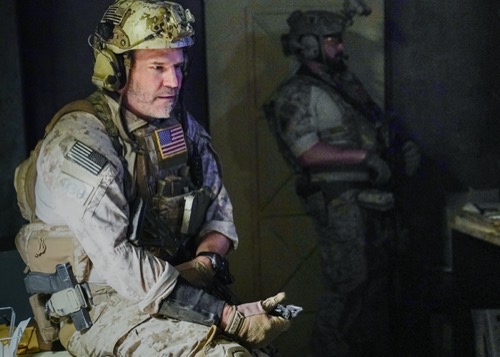 Tonight on CBS their new military drama Seal Team airs with an all-new Wednesday, January 13, 2020, episode and we have your Seal Team recap below. On tonight’s Seal Team season 4 episode 5, “The Carrot Or The Stick” as per the CBS synopsis, “With no leads on Ray’s whereabouts, Jason pushes Bravo team to extreme lengths and considers crossing a dangerous line to help locate their missing brother. Meanwhile, Ray tries to survive captivity.”

Warrant Officer Ray Perry is being held hostage. He was in Tunisia for work when a blast occurred and many were injured or outright killed. However, Ray was taken alive. He was captured by a group of terrorists who were hoping to ransom him back to the United States and unfortunately that was never going to happen. The US policy on terrorism is that they don’t treat with them.

They don’t pay ransoms and they wouldn’t have sent anyone after him if it hadn’t been for Jason. Jason was the former leader of SEAL Team Bravo. He demanded his old unit back because he was going to go after Ray and he was willing to do anything to rescue his friend. He even agreed to a shady deal that he knew was going to come back to bite him.

Only Jason didn’t care. He counted Ray as more than a friend. They were brothers in arms and Jason wanted to return his brother to safety. He came out of retirement just to do so. He got his old unit back and they all flew over to Tunisia to rescue Ray. They had been too slow at one site to rescue him, but they weren’t stopping their search or admitting defeat. They kept looking for Ray.

Jason kept pushing his team to their limits and Blackburn had to speak to him at one point. Blackburn warned him that if he continue to be as tough on his guys as he has been that there was a chance he might lose them. He might push them into making mistakes and he’ll lose his entire team that way. Blackburn warned Jason.

Jason chose not to listen to him. He and his team chased down every lead. They’ve questioned every group they’ve come across and it wasn’t getting them anywhere. If anything, the team was getting angrier at time went by. They knew Ray was being tortured. Its what happens to political prisoners and so time was against them. They were just about to leave the latest place they hit when one of them across a man with Ray’s watch.

The team recognized the watch instantly because they knew Ray never took it off and so whoever the guy is – he must have known Ray or Ray’s kidnappers. The team brought the man to a room. They questioned him in Arabic and later in English. And meanwhile Ray was helping himself.

Ray didn’t break under torture. He stayed strong. He didn’t answer any questions about the American military complex and he found a friend. This other guy was brought in as a hostage as well. He was tied up and he scared. He cried to himself, but he did his best to smother it because he didn’t want his captors to hear. This man was so scared that he asked Ray what he should expect.

Ray hadn’t wanted to talk to him at first. He thought it was a ploy from his captors and so it wasn’t until much later that Ray spoke with his man. He told him how the kidnappers come at random times on random days. They do this to confuse their hostages. They try to break their spirits and leave them so confused that they wouldn’t even think about running away.

But they didn’t know Ray. Ray found something sharp which he hid from his fellow captor and he used this sharp object to keep count of days. He would carve them into the floor. He would defy his kidnappers because Ray didn’t lose sight of why he needed to live and, as long as he remembered his family, he knew he could survive. Ray sustained injuries. He resisted torture of various kinds. He and his fellow prisoners were being dragged out and a knife was put at their throats. According to Ray, they do this every once in a while to scare them and it was nothing more than that. It stopped working on Ray. It did work on the other guy and his fellow prisoner told him that he was thinking of killing himself.

Ray managed to talk him out of it. He told the other guy to think of his son and that would keep him holding on. Ray also told his fellow prisoner about his plan. He had a plan to get a message out to his team. He told it to this other guy because he felt bad for him and so they agreed to work together. Ray was doing this while his team was getting desperate.

They questioned the guy with the watch and he gave up someone who was more higher-up than him. The team tried to question this next guy, but it wasn’t getting them anywhere and so Jason brought up “enhanced” interrogation or in other words torture. Jason wanted to torture a man to get information on Ray’s whereabouts.

Sonny agreed to it. He was willing to do anything to find Ray because he felt guilty about his last conversation with his friend and so it was Clay who spoke against it. Clay reminded them that they couldn’t sink to the terrorist’s level. He said they needed to do things right. He also reminded Jason that “enhanced” interrogation were known for getting false information and unfortunately Jason wasn’t ready to hear it.

Jason was going to go through with torture. He even said it’s a good thing Ray wasn’t there else Ray would have stopped him and so nothing Clay would have said could have stopped Jason. Jason stopped caring about the code. He wasn’t afraid of being court-martialed and neither was anyone else.

Clay still didn’t like it. He tried to get answers from another prisoner in the hopes of stopping the torture before it begin and thankfully he did get something. He also didn’t need to worry. Jason walked himself walked right up to the line and he hadn’t been able to bring himself to cross it. He didn’t have what it takes to torture someone.

Ray meanwhile learned a couple of things. He learned that his fellow captor wasn’t as important as he was because that man was murdered right in front of him and the second thing he learned was that he was on a boat. That’s why his team couldn’t find him. His location was constantly moving because he was on a boat.