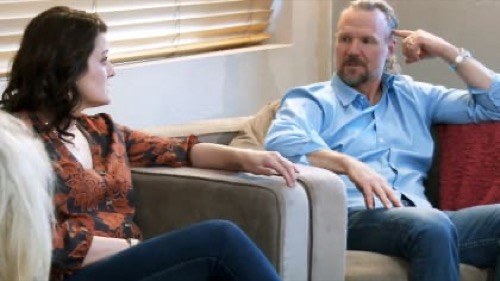 Robyn tries to help Kody patch things up with Meri after their big fight on the property, but Kody pushes back and doesn’t seem interested in fixing things.”

In tonight’s Sister Wives episode Mariah and Audrey come to visit the family. It has almost been a year. They have been living in Chicago. They are moving back to Utah. They miss the family and they also plan to start their own family. It will take a few months.

As far as their wedding, they still need to pick a location. Mariah also wants to be around her siblings. The whole family is thrilled and they also have some experiences with missing out on their younger siblings’ lives. They weren’t able to have relationships with those siblings until they were older. For Audrey, she grew up in Utah and has been struggling in Chicago. She doesn’t have a lot of friends there. Meri thinks Kody, who isn’t there at the moment, is going to be so happy.

Meri loves that the ladies are able to really live their life. Christine likes that they are so great together, they communicate well and make decisions together.

All of the wives are called to Christine’s house. She has finally received an offer on her Las Vegas house. She makes the announcement. They are all happy and surprised. They thought someone was pregnant. This is it for them when it comes to Vegas. Their life there is done. Robyn misses it. She doesn’t feel like Flagstaff isn’t home yet.

Kody recalls missing Utah and having to bring their dying dog Drake back there. He gets emotional thinking about it. He too isn’t settled in Flagstaff. He feels like all of them haven’t been on the same page and happy. They start talking about when they are planning to build. Kody doesn’t want to talk about any of this. He started off excited and now he is tired. All of the wives can see this. He is spread too thin. As they discuss who gets what plot, Kody gets annoyed.

Kody thinks he should turn this all over to the wives. Then he won’t get in trouble. The wives are frustrated, especially when he says they don’t have money. They also worry about the overall family’s health.

Robyn, Kody, and Meri head out to the property. Months earlier, they all got into a fight over everyone’s location on the property. Robyn wants to come out this time and do a better job at communicating. Robyn has noticed that she doesn’t see her Sister Wives as much anymore. Kody also sees how they aren’t functioning as a family. The five of them are not doing well altogether.

Kody feels like he is doing a dance. He has lost the desire to gather his family. It’s easier to deal with one wife at a time. This makes him care less if they all get together. Robyn gets depressed thinking about when they get onto the property.

Robyn has noticed how Kody and Meri have been struggling in their relationship. They did see a counselor but that didn’t do much. Meri thinks she and Kodi are in a dead relationship. Kody thinks she has unloaded all her emotions on him.

Sometimes Kody just wants to sell the land and maybe his wives see this so then they want to try harder. He is sick of them all fighting. The three of them then get into a fight again when Meri is annoyed he is trying to put her into the trees. She never asked for that. Yes, she does like the trees but wants sunlight in her home. Kody is really agitated.

They all sit. Robyn wants them to just talk. They need to figure it out. Kody feels like they are using him to work things out. Kody confronts Meri about how he thought he was giving her what she wanted. Meri doesn’t say much. Robyn really pushes them to all hold hands as they walk to the car. Robyn really senses how much stress there is between Meri and Kody and wants them to work it out. It would affect their family if they split.