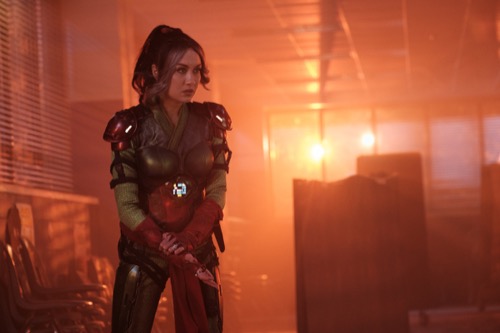 Tonight on the CW their new series Stargirl airs with an all-new Tuesday, September 14, 2021, season 2 episode 6 and we have your Stargirl recap below. In tonight’s episode called, “Summer School: Chapter Five,” season 2 episode 5 as per the CW synopsis, “Cindy (Meg DeLacy) and her new team make their move against the JSA leading to an epic showdown.”

In tonight’s Stargirl episode, Isaac comes into the diner. He is acting strange to Yolanda. He makes comments about “what her friends did” before he storms out. Meanwhile, Beth also experiences a run-in with a bully at school after trying to talk to her dad about her parent’s divorce.

Pat and Courtney run into Cameron after they offer to clean up the school area where Eclipso appeared. Cameron shares how Cindy is back in town. Pat and Courtney come up with a reason why they have to leave right away.

At the junkyard, Mike is working on a project when Cindy appears. She cuts right to the chase and tells him she plans to use him as bait. Meanwhile, Pat is attacked at his garage by teens dressed in suits. Isaac is one of them. They want the robot.

Barb and Courtney come to see Pat at the hospital. He has a concussion. Courtney blames herself since they split up after being at the school. Courtney tells her mom about Cindy and how she is back. Just then, Courtney discovers by phone that Cindy has Mike. Cindy wants Stargirl to meet her if she wants Mike to remain alive. Barb tells her to kick ass.

Swift tries to stop Cindy who has the diamond. She uses it to try and overpower Courtney but she fails. Electricity crackles through Blue Valley. The moon turns orange. Pat comes to the hospital and some of the twins people see the weird changes.

Back at the school, Eclipso finally appears after the diamond shatters. He throws Isaac across the room before hurting Cindy. Courtney tries to help her as she falls into a black hole created by him. Courtney and the gang try to take him on but he’s strong. The Shade attempts to overpower him too but he cannot.

Back at the hospital, Courtney tells pat and Barb how Eclipso disappeared after killing Cindy and Isaac. Her staph is also broken after trying to fight Eclipso. Mike shares that he needs to train. Cindy almost killed him. He feels like this is all a nightmare.

Beth X-rays Rick with her goggles. He looks like he has a broken rib. They talk about how Eclipse just inhaled Isaac. He is feeding off of people. They don’t know what to do.