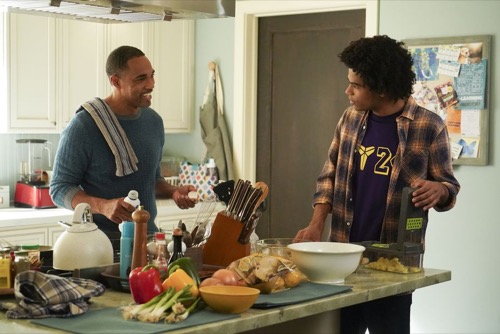 Tonight on ABC Station 19 returns with an all-new Thursday, May 6, 2021, season 4 episode 13 called, “I Guess I’m Floating,” and we have your Station 19 recap below.  On tonight’s Station 19 Season 4 Episode 13 recap as per the ABC synopsis, “Ben and Dean wrestle with life and death after the Black Fighter’s Coalition banquet.”

Tonight’s Station 19 season 4 episode 13 looks like it is going to be great and you won’t want to miss it.   While you’re waiting for our recap make sure to check out all our TV recaps, news, spoilers & more, right here!

In, tonight’s Station 19 episode, the episode begins with Ben and Miranda are at home, he surprises her by lighting candles around the bedside and tells her that the boys are gone for a hike, they won’t be back for a few hours so they can catch up. She thanks him for creating some calm, he tells her that he was thinking the might have the opposite of calm. The two are fooling around when Miranda finds a growth in Ben and starts to freak out. She says she is taking him to the doctor’s tomorrow.

At the Black Firefighters Coalition of Seattle, it is the Annual Ocean Sunset Cruise where they care about celebrating their over-growing numbers, commitment, and excellence. Batallion Chief Gregory says this group of black firefighters is progress. He goes on further, the Floyd family and all black people suffered a loss, the brother was taken away from us with cruelty that we know is there but try every day to forget it. His heart is hurting, this is the way it is in 2020, then why are we participating in a system that does us wrong. He says his mentor told him, we do this for each other, we stay in the department, we raise up in the ranks, we create a fair space, take pride in the fact that as black firefighters our very existence is a revolution.

Ben tells Dean that he should get Gregory on his side for the lawsuit against the police. Dean seeks out Gregory and tells him that his speech felt directed in his direction, Gregory says it was. Gregory tells him that they have to have a united front, they can’t have people in the streets wanting to defund the police, we need the police. Gregory says the reason why police go in before them is to clear a potentially violent scene so a firefighter doesn’t get hurt. All of a sudden, Gregory can’t breathe, he loses his balance and falls overboard. Dean jumps in the water to try to save him. Ben puts on a life vest and jumps in as well.

In the water, the two are trying to save Gregory while they are waiting for someone to come to their assistance. Dean tries to hit his chest to get it going again, and it’s too late. Meanwhile, the boat is far from them now.

We see Dean at home, Condola Vargas tells him that the lawsuit is going to cause friction in the fire department, he says he knows. There is a knock at the door, JJ’s parents are at the door. They just got into town and would love to see their granddaughter. Condola says she has to go home. Dean tells them that JJ is not there. They apologize for all that she put him through and he has all of their support. They say they reached out to his parents and they should be there momentarily.

Back in the water, the boat is really far and the three are drifting and they are still holding on to Gregory. Ben argues with Dean, he wants him to take the extra life vest and let Gregory go.

The two are having a hard time in the water. Ben tells Dean to give him his hand, like a sea otter, they hold hands to stay together.

We see Ben at his doctor’s appointment, Miranda is there, and she participates in the questions. It’s a mass, the doctor guesses that it is a tumor in his testicle, they will have to remove it. He is sorry for giving them bad news, he doesn’t want to imply cancer, but this is important. Ben asks about chemo, the doctor says this is the only way to go, these tumors can metathesize quickly, it is the only way to go.

Back to the day where Dean’s parents and JJ’s parents are at his home. JJ’s mother says they want to support Dean and be there for him, be their family too, but Dean’s mother is not keen on the idea.

Ben tells Dean about the tumor in his testicle, he says he found out the day before they heard about George Floyd, it is a lot to process.

Miranda and Ben are in the car, he asks her what they are going to tell the boys, he is their father, what will they think. Ben says he doesn’t want anyone to see him like this, he just wants more information. She asks him if he wants a second opinion, she reaches for her phone and tries to grab it while he is driving, and the car swerves. Ben pulls over, he says he is healthy, he works out and eats right, why is this happening. She tells him that she can’t lose him, she lost her mother and so many people this past year, she can’t do it alone.

Dean asks Ben when is the surgery, he says he hasn’t booked it yet. Ben calls him a dumbass for not having booked it already.

During the dinner, Dean finds out that JJ’s parents are rich, they own all the lakefront property. Before they leave, JJ’s mother says they would like to have visitation rights.

Dean starts to freak out in the water, he gets stung by a jellyfish. Then, he tells Ben that he is in love with Victoria, he never told her, he doesn’t know what would have happened if he had said something. Dean asks him not to say anything to anyone. Dean says he will take it to his grave, which will probably be the water, then they both start laughing and hold hands.

Dean is with his son, he is talking to his son about his surgery.

We see Ben and Dean, they are both washed up on the beach and they are alive. Miranda and Victoria are there. Victoria hugs Dean and tells him she loves him too. Both men are in a stretcher, they reach out and hold hands.