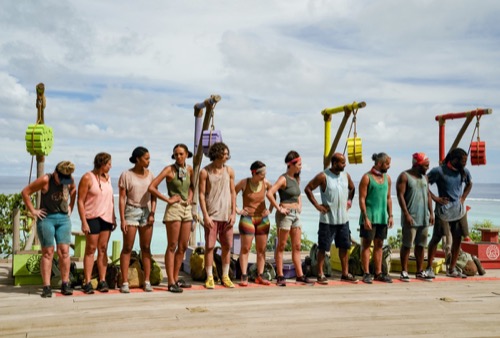 Tonight on CBS Survivor airs with an all-new Wednesday, November 3, 2021, Season 41 Episode 7 and we have your Survivor recap below. On tonight’s Survivor season, 41 episodes 7 called “Ready To Play Like A Lion” as per the CBS synopsis, “Castaways compete in their first individual immunity challenge in the game. Also, Erika has been on Exile Island for two days, where she must make the biggest decision in the game thus far.”

In Tonight’s Survivor episode begins at Exile Island, it is late and raining. Erika actually woke up that mornig and thought she may have not made it through the night, but she gained strength with having to endure such a tough evening.

After two days and two nights being alone, she returns to the other castaways. Jeff tells her that she had a big decision to make. If she decided to change history, the ones that have immunity would lose it, and the ones who don’t, would have immunity. She decided to smash the hour glass and change the course of history.

This means, Evvie, Sydney, Naseer, Ricard, Deshawn and Danny are no longer guaranteed a spot in this new merged tribe.

For today’s challenge, they are going to use their feet only – they will have to release a rope, blocks will drop into a bucket, they will then stack them in a circle, with their feet, and put a flag in the middle. First to finish wins individual immunity. In the early lead it is Sydney and Evvie. Ricard does it by seconds, he wins immunity over Sydney and he is guaranteed a spot in the top 11. This is the first individual immunity and Ricard couldn’t be happier. Erika says the days of her being the little lamb are over.

Back at the camp, there is a lot of talk going on. Ricard wants to get rid of Evvie, he and other tribe mates are seeing her as a threat. Evvie knows that people are against her and it sucks. Xander offers to give Evvie his idol, then he, Evvie and Tiffany plan to take out Deshawn. Xander finds out the Liana has an advantage, that’s a curveball and he needs to figure something out.

Xander goes to Danny and tells him that Leana has a big advantage, he then runs to Leana and tells her. Leana shows her advantage to Shan for advice.

Time for Tribal Council, Tiffany says they all don’t know who to trust and this is Survivor. Shana mentioned the “shot in the dark” and how it could turn the game on it’s head. Deshawn says he came into the game basing it on social, but now he is one of five that can go home. He wishes there was more value in the game for the social abilities he brought to the game. Evvie says that her name is on the card tonight, but Xander has her back. Xander says he has an immunity idol and he willing to give it away tonight. Danny says he knew Xander had the idol, Evvie is playing two sides to the game.

Evvie admits that she told Danny and she regrets it. Liana says she has the Knowledge of Power, she reads it out. Liana asks Xander if he has an idol, he says no, but tells her she can have his fake. Just before tribal, Xander gave Tiffany his real idol, he wanted to flush Liana’s advantage. Evvie thanks Liana sarcastically, she told her she was safe and here she is trying to take it from Xander who wants to save her. Tribal goes crazy, everyone except for Xander, Erika and Tiffany get up and start whispering in each other’s ears. The whispering goes on and on and on. Jeff just sits there amused. Time to vote.