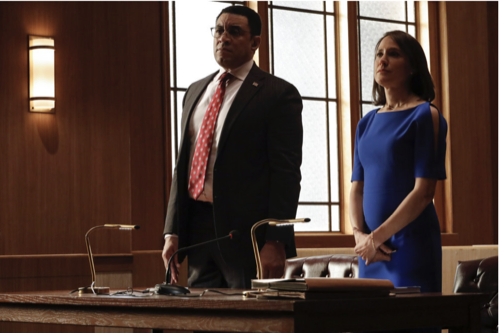 Tonight on NBC their hit drama The Blacklist starring James Spader airs with an all-new Friday, February 5, 2021, episode and we have your The Blacklist recap below. On tonight’s The Blacklist Season 8 episode 5 called, “The Fribourg Confidence”,  as per the NBC synopsis, “The Task Force investigates an organization of bank robbers with special expertise in stealing from other criminals. Meanwhile, an old blacklist case resurfaces.”

In tonight’s episode, we see a man and a woman in bed, the alarm is going off in their house. The alarm company calls and says officers are en route. The man says this is the third time this month, it is probably just the system. When Carl answers the door naked, three people are there with bird masks on. They enter the house and put a gun to the man’s head and tell him it is really easy, trip the alarm and his wife dies, look at their faces and his wife dies.

One of the robbers is a woman. They have Carl and his wife get dressed and ask for a key to a lock box. Carl gives it to them and they take him with them to the bank, Carl is the manager. Inside the box is a passport of Reddington, a flash drive and note that reads, Elizabeth Keen says hello. The moment the robbers get what they want they are gone. Carl calls someone and says, call Reddington we have a problem.

Reddington tells Carl that he entrusted him with his belongings because he thought he would keep them safe, but obviously he was wrong. Carl says whoever robbed him knew where to look and he didn’t tell them. Carl passes him the note from Liz. Red tells him to leave. Red tells Dembe that his hunch was right, Liz was behind the robbery. Red calls Cooper and tells him that he can add bank robber to Liz’s resume.

He knows a few of the criminals she is mixed up with, they call themselves the “Fribourg Confidence.” In three years they have stolen over twenty five millions dollars from at least six US banks. The thefts were never reported because the accounts were held by criminals that have arrangements with shady bank managers. Last night they stole something important to him, and he wants it back. This case may help them to find Liz.

Cooper updates the task force on the case, and that Red thinks that finding this crew is their best bet at finding agent Keen. Park and Ressler go to the bank, they are in the safety deposit box room and Carl is there. Ressler says he wants to see the box that was opened the evening before. Carl tells them the truth, there was a woman, she was the leader and new exactly where to go.

Cooper is in his office, Olivia shows up, she says that the freelancer, a contract killer, has filed a motion to withdrawal his guilty plea. He has hired Scooter Rovenpor to handle the appeal and it got the judges attention. They have ordered both parties to appear for oral argument on the motion to withdrawal. Agent Keen swore out the affidavits based on the informant’s knowledge so he wants to hear from her directly. Cooper says that will difficult she is in the field. Olivia says to get her back, she is due in court first thing tomorrow. Meanwhile, Scooter tells the freelancer that he is going to defend him for free, because mass murderers deserve equal justice.

In court, Ravenpor tells the judge that that new information has come to light, agent Keen has made a number of high profile cases based on intel from confidence sources, a shocking number, in fact more than any other case agent. And that confidential information was brought to her by the same individual. The judge wants to know if Keen had multiple sources. The judge says he wants to hear from Keen. Cooper says that she is on assignment and cannot be there, and he doesn’t know when she can be there. The judge says that if Keen is not there by 4pm, he will grant the motion and the freelancer may very well be released.

Red finds out the handwriting on the note matches that of a robbery, the Bell Tower heist, in 94. Red knows the man who did it, Moores. Red goes to visit the man, he tells him that two nights ago during a heist a note was left, the same handwriting as the note he gave the teller in the Bell Tower heist. Moores laughs and says he takes two steps and he has to rest for an hour. Aram calls him, says two weeks ago Teresa Kristoff opened a box and Kristoff died three weeks ago. Ressler sends Red a picture of the woman who opened the box, there are pictures of this woman in the house where Red is standing in now.

Red lets Moores know that his daughter’s handwriting on the note and he needs to tell him where she is. He says Jennifer and he are estranged, he got those photos from her mother. Red wants to know where she is, and he says he won’t ask again. Moores tells him to kill him now because if his daughter is a theif he has nothing to live for. Red calls Cooper and updates him. Red doesn’t think that Moores knows where his daughter is. Aram is able to find Jennifer, Cooper says he wants her followed, hopefully she will lead them to Liz.

They are watching Jennifer when a man walks up to her, then another woman. Aram is having problems with the audio and they can’t hear anything. The two people tell Jennifer that Reddington showed up at her father’s apartment. Aram gets out of the car and pretends he is looking for something, he drops something and when he bends down he puts something under the table to listen to the three. Jennifer says they lay low until Givens pays them. Ressler hears that and he knows that Liz has an alias, Caroline Givens. Jennifer calls Caroline and moves up meeting her.

Ressler calls Cooper and tells him that Keene has a drop meet today. It is time for the meet, Park and Ressler are watching. Jennifer sits down on a bench, she has the flash drive. Jenniver calls Esi who tells her to do exactly what she says. They arrest Jennifer, but it is too late. She put the flash drive in a coffee cup on a garbage can, a scruffy looking man picked it up and drives away with Esi.

In court, Cooper tells Olivia that Keen will be there. But she isn’t, Ressler shows up. The judge calls everyone to the bench. Olivia pleads with him not to let the freelancer go. They clear the court room and Cooper tells him that Reddington is the informant. The judge says that any evidence form Reddington is inadmissible and he is dropping the charges against the freelancer. Olivia tells Cooper that he better bring Keen in soon because when this blows up, she will not be jumping on any grenades.

Aram is speaking to Red, he has their associates but not Liz – he shows Red a photo of them and he doesn’t recognize any of them. Red returns to see Moores and asks him why he didn’t tell him about his nurse, she is in the photo with Jennifer.

Ressler speaks to Jennifer, she asks for a lawyer and he tells her that she is looking at twenty years. Park interrogates the nurse, and Aram the guy who was with them. Moores tells Red that he didn’t want this life for her, he cut ties with her because of that. He says he knew she was in the business and he should have called the police when he knew. He selected the targets but he told her not to touch Red. Jennifer tells Ressler that a woman named V hired her, and it was personal, she was coming after Reddington. Ressler gets info from Jennifer, an address of a safehouse that Keene is running.

Cooper heads to the safehouse, Dembe answers the door and Red tells him that they are too late, she is already gone. They argue, Red says all of a sudden, the freelancer has an expensive lawyer and the judge wants Keene in court, that to him is unsettling. The Freelancer is out on bond, Cooper tells Olivia that Keene wants to kill Red.

A man arrives in Ravenpor’s office with a briefcase full of cash, he leaves. The freelancer is there, he is told that Liz got him out because she needs his services. Cooper gets in his car, the coffee cup is there, with the flash drive.

Red asks Dembe to let him out in the park, he wants to clear his head. Meanwhile, Cooper put the flash drive in his laptop and finds it is full of files.