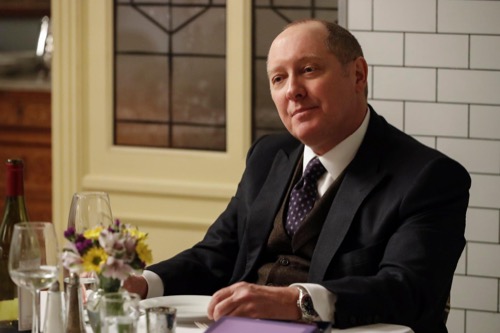 Tonight on NBC their hit drama The Blacklist starring James Spader airs with an all-new Friday, February 26, 2021, episode and we have your The Blacklist recap below. On tonight’s The Blacklist Season 8, Episode 8 called, “Ogden Greeley”,  as per the NBC synopsis, “The Task Force investigates the apparent disappearance of a defense contractor. Cooper receives an unexpected offer and Red makes a connection.”

In tonight’s The Blacklist episode Cooper gets an offer to join the senate, he goes to see Red and speaks to him about it. Red is surprised that he is telling him before telling his wife, Red says don’t tell him there is trouble in paradise, Cooper says no, he values his opinion and his wife is just going to think of the governor as an ulterior motive.

Red tells Cooper that he wants to move on to the reason why he called, he asks Cooper if he knows the national resonance office. Cooper says that it took thirty years for the government to admit it existed. Red says Ogden Greeley works for them as a defense contractor, five days ago he went missing. Everything to know about the country’s satellite technology, he knows it. The CIA thinks he has been abducted.

Associates of Red’s in the middle east forward him some communique, a video from Ogden, “I am a patriot, I have tried and failed to convince those keeping America safe to act responsibly. As a result, I have come to believe that the only way to address our security issues is to exploit them. To show the bureaucrats through military defeat the flaws they are too blind to see on paper, I have decided to sell my knowledge of the vulnerabilities present in our satellite systems to the highest bidder.” Red knows that North Korea, Russia, and Iran are interested. Cooper is worried that there are others.

Cooper updates the task force then he tells Ressler to go see his wife and see if she knows anything. Bidding ends in thirteen hours.

Park and Ressler go to see Mrs. Alice Greeley, she says agents from the CIA and NRO already visited her. Ressler asks her if she ever suspected anything, does she know where he could be hiding. She says he loves them, he is a good man and he didn’t do anything wrong. Then we see Ogden enter room number 901, a woman asks him if it is done, then she kisses him.

Red is in the park, Anne is in the park as well, he tells him he is escaping everything today. She is drawing on a notepad, he calls her an artist, she says no, she does it for leisure. Red peers over at her sketch then look at her sketchbook, he introduces himself. They take a walk, she tells him that her husband died of cancer. He tells her he is a fugitive, number one on the FBI’s most-wanted list and she laughs.

She tells him she lives in Kansas, she is in New York to go to the theater, after he passed she promised herself she would visit and go to as many shows as possible in a week. He tells her that he finds bird watching is so calming. She asks him if he would be interested in half a chicken salad sandwich, they share it. Her Uber has arrived, he tells her it was so nice to see her again. He tells her to enjoy her show. She says she knows nothing about him, she has been doing all the talking, he tells her it has been defined.

Red gets a call, Dembe spoke to Marvin, they can cover the retainer. Dembe tells him that he is at risk in the open, Red says he is fine. All of a sudden, Anne is back, she canceled her Uber, and curtain time is not until eight. She says she needs his help finding a souvenir for her sister.

Park and Ressler meet with James Halloran, director of the NRO, and Paul Thorne from the DNI office. They believe Greeley has the intel he is trying to sell. Greeley knows enough to damage the satellites irreparably. If an enemy of the United States buys that intel and uses it they are looking at a war that they can’t win.

Park and Ressler are with Aram, he says they found Greely, at a Berlin hotel with a woman. Cooper is not there, he had some personal business to deal with. Meanwhile, Cooper is in a car with his wife, she says she can’t think of a man better to be a senator than him. He is decent, honest, and caring. They meet with the present senator. Cooper says he is working on a case, and if it breaks, he will have to leave.

Red is sharing a meal with Anne, she insists on paying and he jokingly says that if he knew she was going to pay, he would have chosen a more expensive wine. She asks him to tell her more about his work. He says he has his own business, he says he consults and the past few years he has had a government contract. He asks her if she likes Alfred Hitchcock. Dembe walks in, Red says he has to go but he has had the most wonderful afternoon. He offers her a ride, but she says she is going to walk. He asks her to change her flight and join him for the midnight showing tomorrow night for North by Northwest. She promises to think about it, he tells her it is a sincere offer.

Back to Cooper, he gets a call and has to get up. It is Ressler, they have some security footage of Greeley and a Russian spy, Nina Kurylenko and she landed in London a few hours ago. Cooper goes back to the dinner and says he has to go, his wife stays there.

Dembe tells Red that he shouldn’t meet with Anne again, she is just going to get hurt. Red tells him to talk about the deal.

In London, Park and Ressler see Nina, Cooper tells them to get her to the safehouse as soon as possible. The bartender alerts Nina that Park was watching her, she gets up and leaves the bar. Park sees her go into the ladies’ room, she follows her, but there is nothing. All of a sudden, Nina comes out of the hallway, she makes a run for it and Ressler catches her. Nina tells her she is a British national and they are from America and have no jurisdiction. Ressler tells her to drop the act. All of a sudden, she has a Russian accent. Park and Ressler get into an argument, Ressler wants to let her go if she tells them where Greeley is, Park says no way and walks out.

Nina says that Greeley told her what it was and gave her government a chance to make a bid on it. He asks her where the meeting is going to be to sell the intel. Mongolia, and it sits between Russia and China.

Cooper goes to the Whitehouse, Greeley is not a known terrorist. Cooper explains to them that Greeley is selling the intel. Greeley is on his way to the meeting, and they have him being watched. Two unknown subjects are moving towards Greeley, it is Red and Dembe, Cooper is shocked and says OMG. They were going to strike Greely, but now that Red and Dembe are there, Cooper tells them they can’t. They now don’t have a clear shot, no visual, Dembe, Red and Greeley go inside a building.

Dembe meets with Cooper who tells him he knows that Red has the intel. Dembe tells him that the country needs a man like him. Cooper goes back to see the senator, Cooper gives him an envelope. Cooper tells him he has proof that he used public money for private gain. The senator says he thought he had the best man for the job, but he was wrong.

Red meets with Cooper, he tells him that he wants to sell the intel for 175 million, he paid 150 million. Greeley knocks on his Russian spy’s door, Park and Ressler are there to meet him. Red and Cooper agree they are both better people because they are working together. Red asks him if his wife will be upset about his not taking the senator position, he says no, she will just be disappointed for ten minutes. Red calls Anne and tells her is afraid that he is not going to make it. She says it is not a big deal, it’s ok. She says she didn’t change her plans, she just got home a few hours ago. She is lying, she is outside the theatre. She goes into the movie, Red looks sad.