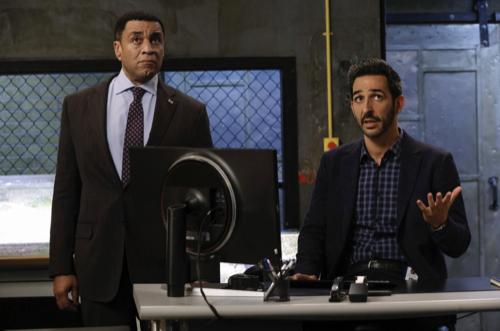 Tonight on NBC their hit drama The Blacklist starring James Spader airs with an all-new Thursday, November 11, 2021, episode and we have your The Blacklist recap below. On tonight’s The Blacklist Season 9, Episode 4 called, “The Avenging Angel”,  as per the NBC synopsis, “The Task Force races to locate a blacklister who uses any means necessary to return what has been unjustly stolen. Ressler asks Park for a favor. Cooper tries to piece together an event for which he has no memory.”

The woman tells him that he has a date with gravity after he tapes his confession. A man takes a knife to his throat and drags him to the balcony and throws him over while she tells him that people will think he killed himself.

Harold is in his car, he looks confused, he woke up I the parking garage and has no idea how he got there. His wife tells him that he scared her to death. She goes on to tell him that the man she had the affair with, was shot and killed last night.

Red is with Heddie asks about the operations they still have with Oleg Nikovich. She says he has provided them with contacts to move minerals out of Afghanistan for which he has been well paid. They moved a hundred million dollars worth last year taking 19% off the top. Heddie leaves and Dembe shows up. Dembe thanks him for coming back after he was injured. Red says he has a case, Adam McHenry. Red heard rumors that the suicide note and the suicide itself were the work of the Avenging Angel.

Dembe goes to speak to them about the Avenging Angel. We then are shown a video of McHenry saying that his shares of Genocide go to the person they rightfully belong to, Andrew Friesen. And then says, please forgive me. Andrew Friesen sued for his fair share and lost and now McHenry is dead and he owns the whole company.

Harold is caught outside the house of the man who was shot and killed, named Kostner. A homicide detective sees him outside, and not knowing who he is, tells him is an investigation and he needs to leave. As Harold pulls out, the man takes a photo of Harold’s license plate.

Ressler tells Park that he has to provide a urine sample and he is not using but he is not sure he has been off long enough to come out clean and he needs this job. If he comes out positive, he could be off the task force.

Harold is on the phone, he requests a copy of the homicide report for Kostner, his eyes only.

Park and Ressler interview Friesen, he says McHenry was his best friend and he did not kill him. Friesen was betrayed by McHenry, but he didn’t kill him.

Park got the clean sample that Ressler needed.

Dembe and Aram find the staging house where the Avenging Angel works, on a board in the living room is a photo of McHenry. Meanwhile, she has kidnapped another victim.

Red goes to see Alexi with Heddie, he mentions the property that he sold because he had a cash flow problem. Red makes a comment about his father’s painting on the wall, Red says he couldn’t put a price on perfection. Alexi asks him if he thinks he could get a million for it. Red buys the painting, inside the painting is a Van Gogh hidden inside and the Avenging Angel had an interest in it.

The task force meets, Aram says they have gone through evidence files from MPV and three men were in multiple surveillance videos, one of the Derek Huntley, the 76the richest man in America. Another one is Walter Conrad, an administrator at St. Damien’s hospital and the third is a local steelworker, William Green. The Avenging Angel is watching all three, and they have no idea why.

Little do they know, the three have been kidnapped by the Avenging Angel. She opens some doors and inside the other room are hospital beds.

Harold is thinking back to a conversation with his wife are speaking about her affair, she tells him it wasn’t about sex, she joined the book club because he was never at home. He meets with Louie, he tells him that he needs a ballistic test on his gun to see if it was fired.

St. Damien’s hospital had William’s new heart for a transplant, but Derek was also in need of a heart and offered to pay for the pediatric wing if Walter could guarantee that the next heart available as is, that would be William’s heart. Now the Avenging Angel wants to right the wrong, give William his heart. Inside the other room, there is a team of doctors who are going to perform the operation. The task force is discussing it and they have pretty much figured out what happened regarding the heart based on the three people. Meanwhile, it is time for Ressler’s drug test.

The Avenging Angel is sent a photo of the painting, she tells her partner that she will pay double for It, she wants it.

Red arrives in the operating room just in time to stop the Avenging Angel, he says he is there for order, to balance the scales and stop evil. Red says he knows what has happened, but Derek also gave money to a wing that was meant to save children’s life. He is a sinner, but he doesn’t deserve to die. She says he will die and William will live. Red threatens to kill her and use her heart to save William, then we hear a gun go off.

The Blacklister was killed and her heart transplanted into William. Harold tells Red that he thinks he killed her, Red won’t admit it. Harold says she fancied herself judge, jury, and executioner, she is no different than him. He laughs and says we all have the devil in us, but some of us have an angel in us as well.

Harold gets the ballistic report, it is a match and he is sitting outside the police station in his car.