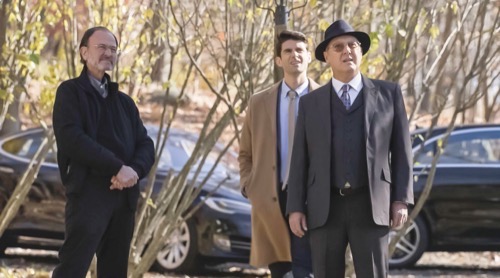 Tonight on NBC their hit drama The Blacklist starring James Spader airs with an all-new Friday, January 22, 2021, episode and we have your The Blacklist recap below. On tonight’s The Blacklist Season 8 episode 3 called, “16 Ounces”,  as per the NBC synopsis, “Fueled by his betrayal, Elizabeth Keen seeks vengeance on Reddington.”

Agents Ressler and Park are around the water at the park looking for Reddington. Meanwhile, we see Keen at home, she is packing up and listening to her voicemails. Katarina left a message, a recording of her last conversation with Reddington in the park. Then we see Reddington, he is with Dembe and someone is wrapping up Katarina’s body, Dembe tells him that he has pushed Elizabeth too far.

Aram and Park show up at Keen’s apartment, most of her clothes are gone, she is actually in a motel, she closes the curtains and drops a bunch of cash on the bed, then she listens to the recording of Katarina and Reddington again. Aram found out that Keene put Agnes with someone to watch over her, she told them that she had to leave town for a while for a work emergency.

Meanwhile, Elizabeth keeps playing in her head over and over again, Redington shoot Katarina. Then she goes to see Cooper, she tells him that it was an execution in the park and she has all the evidence he needs. She saw it happen with her own eyes and he can’t get away from this, he murdered her mother. He reminds her that she is a Russian spy. She says he did it because he knew he could and nobody on the task force would do anything. She is there because she thought he would do something.

He says he can’t do anything unless he takes her down with him, she kidnapped her grandfather and for that, she could lose Agnes. He then tells her to call Reddington, find out why he did it, it may start the process of healing for her to understand. She says for him she will consider it. He says if this is the last time they see each other, he wishes she called him Harold. She thanks him for his honesty, then she calls him Harold.

Keen goes and tells Aram that she is stepping back and won’t see him for awhile and just wanted to tell him everything she is grateful for. When he goes to grab some towels, she grabs a note from his desk.

Reddington is with Norman who tells him that Dom was taken from him. Skip walks up and says they should bulldoze the house. Reddington says it doesn’t belong to him, it belongs to Liz now. Norman and Red walk a little further, Norman wants to know if Red still wants to leave everything of his to Elizabeth.

Keene is in the basement to the supply room, she has a note from Aram and says she is there to pick up something for him – the clerk gives it to her and says he doesn’t know who her target is, but if she uses what is in the envelope he is giving her, her target won’t know what hit him. Meanwhile, Reddington still wants to leave everything to Elizabeth.

She calls Reddington and tells him that she saw everything in the park, she is leaving with Agnes and he will never see the two again. Red says that she did see them, but she didn’t see everything she think she saw in the park and he wants to talk. He is at a lake, near Dom’s house where his ashes are being scattered. He says after they talk, if she still wants to leave then fine, she agrees.

Reddington tells Norman their story is not over yet.

Ressler found Keen, she tells him that if Cooper sent him, she is not going back. Ressler says he agree with her, coming back to work is not an option. He says he knows her and he knows that she is not going to let this rest. She asks him if they are done, she has to go. He calls her Alice, she got drunk one night and told him her alias, that is how he found her.

Elizabeth arrives at Dom’s house, Reddington tells her that there is an explanation. She first plays the recording to him. She says her mother prepared her for this moment. He tells her that she can go, or perhaps stay while they lay her grandfather to rest and have a conversation. She says fine, but he will drive with her. Red is about to open the door and he starts coughing up blood, Dembe grabs him, Norman tells him that he is not allowed to die. Dembe drives off with Red, Norman tells Liz that Red loves her, he still wants to leave her everything after she chose that woman over him. Liz says that woman was her mother and he killed her, she doesn’t want anything from him.

Dembe got Red medical help fast and calls Cooper who shows up at the hospital, he tells a nurse to get her security team on the floor and secure it. Meanwhile, Liz goes to see Esi and gets her to work with her to kill Reddington.

At the hospital the US Marshall shows up, they got a tip that Reddington is there; Liz made the call. The US Marshall tells Cooper that they are there to take Reddington into custody. Liz also tells her that she stole military grade explosives.

Esi makes her way to the hospital to see Dembe, she says Liz is on her way to kill Reddington. She wanted Esi to be her eyes and give her the room number where Red is. Esi calls Liz, tells him that Red is in room 312. Dembe then calls is men and goes to leave the room, but tells Esi not to leave Red out of her sight.

Aram calls Ressler and tells him what Liz stole from the supply room. Ressler walks into Red’s room just as Esi attaches the explosive to the bed. Ressler sees it, and calls a bomb squad. Esi then texts Liz and tells her it is done. Ressler notices the bomb beeping, he takes a chair, breaks a window and grabs it, throws it out the window as it goes off.

Elizabeth and Esi meet at the motel and Esi tells her that he couldn’t have survived and there was an agent in there with him, and he couldn’t have made it out either. Liz calls Aram, he asks her not to bear witness to what she has done. He tells her that he knows she forged his signature and now he is involved in attempted murder, two counts. Red survived, the doctors are with Ressler. Aram says the next time he sees her, she will be under arrest. The doctor tells Ressler that all things considered, he is in pretty good shape. The US Marshall tells Cooper that he got orders to leave.

Esi tells Liz that now they have Reddington and the FBI after them. Liz calls Red, she says he prepared her to be a criminal, and now she is one, she is coming after him. She says she has it in her to kill him, but he doesn’t have it in him to kill her and that is why she is going to win.

Liz goes to speak to Ressler, she hugs him. He tells her that she nearly killed him. She says she is a fugitive again, but she needs a rest, at least for one night. He opens his door to her.

Cooper goes to see Reddington in his room, he tells him that he needs help, about what happened with Katarina, he wants to know why he did it. Reddington says that he is not sure if he understands it himself. They agree they need each other to help Liz, but first Red says, they need to put her on the top of the Blacklist.