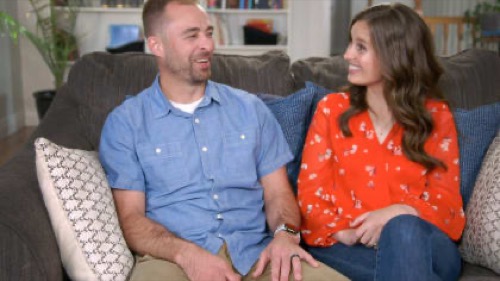 Tonight on TLC their reality show The Blended Bunch about the newly blended family the Shemwells airs with an all-new Tuesday, March 23, 2021 episode and we have your The Blended Bunch recap below.  On tonight’s The Blended Bunch season 1 episode 2 called, “Let’s Talk About Sex,” as per the TLC synopsis, “Aimee’s mum, Rachel, comes to visit, stirring up Erica’s insecurities and causing a confrontation with Paige and Dave.

As if family drama isn’t enough, Erica and Spencer need to have the sex talk with the older kids.”

So make sure to tune in tonight between 9 PM – 10 PM ET for our The Blended Bunch recap.  While you wait for our recap make sure to check out all our television spoilers, news, recaps, and more, here!

Tonight’s The Blended Bunch Recap begins now – Refresh Page often to get the most current updates!

Spencer and Erica have made a life for themselves. They’ve both lost their spouses three years ago and now they’re moving forward with each other. The two combined their families. They’re now happy parents of eleven children and they want to go ahead with formally adopting each other’s children.

However, their families have posed a problem. The families sometimes seem resentful of the fact that both Spencer and Erica have moved on and both sides are known to make snide remarks. Spencer’s later wife Aimee was an amazing woman. Her friends and family would go out of their way to tell Erica that Aimee was the epitome of a mother. She was born to be a mother. She was so great that Erica would naturally fall short compared to her and so that hurts Erica.

They became especially close and she doesn’t call him her son-in-law. She calls him her son. Rachel is also good to Erica and Erica’s children. Erica’s kids call her Grandma Rachel. Rachel also wants a relationship with Erica’s parents and so she was upset with her last trip to see the family because she felt Paige and Dave were distant from her.

Rachel wanted to work on their relationship. She told both Spencer and Erica as much and Erica assured her that her parents were a part of their plans for Rachel. They were going to visit an apple orchard together. Rachel also wanted to address the distance issue. It had hurt her when Spencer moved away with the kids because she had lost her last tie to her daughter and so she asked Spencer tonight if there was ever a chance he might move back to be closer to her.

Rachel wasn’t upset with Spencer. She understood that Aimee’s death was hard on him too and she also didn’t get upset when she heard about the adoption. Rachel and her husband Jimmy (Aimee’s stepfather) approved of the idea. They said they couldn’t have chosen a better mother for the kids or a better wife for Spencer. Rachel and Jimmy were very understanding. They were also supportive and Spencer and Erica weren’t getting that from other circles.

The family all being Shemwells is an issue with Erica’s side of the family because they are like “remember Tony” if not outright saying that Tony wouldn’t have wanted this. They trying to guilt Erica and Spencer out of their decision but the two of them have to consider this because it wasn’t just about a name change.

It was about legal rights. Erica has no legal rights to Spencer’s kids if he were to die before the adoption went through and the same could be said of Spencer with Erica’s kids. The two of them have to consider what would happen if the other died. They’ve both lived through widowhood once before and so they know it could come about unexpectedly. Erica and Spencer want to prepare for any and all outcomes.

Their families on the other hand have proven resistant to the idea. Paige and Dave don’t even want Spencer’s kids to call them Grandpa and Grandma and that came up at the apple orchard. Rachel had wanted to address it because one of her grandkids mentioned it. Rachel is called Grandma Rachel by all the kids and so she didn’t see why either Paige or Dave would be against receiving the same treatment.

They now realized that the kids were feeling this way and so they said the kids can call them whatever they like. They just wanted everyone to be happy. Erica’s parents speaking to Rachel also helped ease Rachel’s concerns. She knows that her grandbabies are in safe hands now and she felt closer to Erica’s parents after their conversation.

A few days later. Erica was feeling stressed and, when that happens, she goes off alone. She also speaks to be her brother Quinn. Erica and Quinn are super close. She tells him everything and she needs to stop doing that because he gets judgmental. Quinn has previously called their decision to adopt each other’s kids “rash”. He also claims that Spencer was following his dreams and leaving all the hard work to Erica. Quinn even judges Spencer for Erica wanting to be alone when she’s stressed.

She told him that she doesn’t tell Spencer when she’s being overwhelmed because she was secretly afraid of being compared to Aimee and somehow Quinn managed to blame Spencer for that as well. How was Spencer supposed to know what his wife was thinking? He wasn’t a mind reader and she’s the one telling him she could handle things.

Erica also hated it when Quinn made it seem like Spencer chose her because he needed a mother for his kids. She said that Spencer could have easily found other women willing to be mothers and that they wouldn’t have seven children of their own. Erica and Spencer both do their part in the parenting. They just sat their older kids down to discuss puberty and where babies come from. Erica also steps away when Spencer is having a moment. She knows what that’s like and so she gives him space and that’s the part of her marriage that Quinn doesn’t see.