The Bold and the Beautiful Spoilers: Carter Vows Revenge After Zoe Split – Steals Paris From Zende? 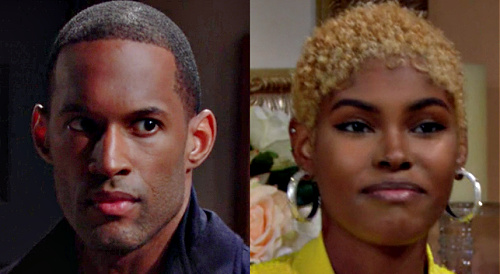 The Bold and the Beautiful (B&B) spoilers tease that Carter Walton (Lawrence Saint-Victor) may have some negative energy to get rid of soon, and the way that he channels that energy could have some serious consequences for Zende Forrester Dominguez (Delon de Metz).

As B&B viewers know, last week, March 1-5, left off with Zoe Buckingham (Kiara Barnes) begging Carter for another chance to prove her love to him.

Unfortunately for Zoe, it looks like Carter is going to turn her down flat, saying that their relationship is over for good. Carter apparently won’t be able to get past how Zoe threw herself at Zende and did so behind his back.

Carter feels like the trust between himself and Zoe has been shattered and that he can never get back what they had. It’s a real shame, but it looks like Carter will summarily dump Zoe.

Well, one wonders where Carter is going to go from here. Sure, Carter has his COO position at Forrester Creations to keep himself busy, but it would be hard to blame him if he also wanted to get a little revenge on Zende for making a move on Zoe.

Carter knows about the text message that Zende sent to Zoe a while back urging her not to be with him, and he’s not at all happy about it.

Might Carter decide to take his frustrations out on Zende in the near future? Carter might find himself peeved that Zende is just happily moving on and wooing Paris Buckingham (Diamond White) now.

In fact, the more that Carter thinks about Zende just moving from one Buckingham sister to the other, he might get really irritated with the whole situation.

What if Carter decides that he wants to totally sabotage Zende’s burgeoning relationship with Paris? Carter could make a big play for Paris himself, which would probably irritate Zende to no end – that is, if he knew about it.

Maybe Carter would go so far as to make some secret plays for Paris behind Zende’s back so that Paris is conflicted about her future with Zende.

Of course, an added benefit for Carter in messing with Paris and Zende’s romance would be that Zoe would probably flip out to learn that Carter’s pursuing Paris.

It would certainly be an effective ploy on Carter’s part to cause havoc for everyone involved. Of course, in the end it probably wouldn’t make Carter feel any better, but it would maybe put Zende in his place, which could be satisfying.

We’ll see what happens here, but given how hurt and angry Carter is right now, he just might lash out. Do you think that Carter will try to sabotage Zende and Paris’ relationship?

Stay tuned to B&B and don’t forget to check CDL as often as you can for the latest Bold and the Beautiful spoilers, updates, and news. We’ve got you covered!