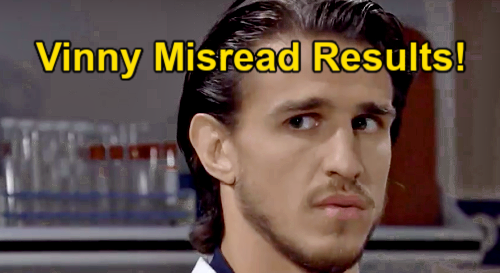 The Bold and the Beautiful spoilers document that Thomas Forrester (Matthew Atkinson) and John Finnegan (Tanner Novlan) are choosing to believe that Vincent Walker (Joe LoCicero) knew what he was doing. They appear to have concluded that Vinny understood the paternity results he was analyzing. Is it wise for them or anyone to do so?

A natural next step would be for Finn to be tested again. While a future test wouldn’t be one-hundred percent conclusive, the elimination of reasonable doubt could be removed if that happens.

So, it’s fair to speculate if Vinny read the test results correctly, believes that he changed them to make Liam Spencer (Scott Clifton) become the father, and to wonder if the happiness Steffy Forrester (Jacqueline MacInnes Wood) and Finn are enjoying is real.

Bold And The Beautiful Spoilers – What Is Believed To Be True

The quartet in question (Steffy, Finn, Liam, and Hope Spencer, Annika Noelle) were expecting test results to be delivered. There was a short delay, during which time it’s now assumed Vinny was adjusting reality in order to make Liam appear to be the father.

Thomas began to suspect that Vinny had acted with malice when his friend from elementary school began volunteering unusual comments. Vinny kept pushing that Thomas would gain an opportunity with Hope if Liam was the dad.

Vinny also demeaned both Liam and Finn, focusing on issues that he felt needed to be personally addressed. And, most tellingly, he spoke in depth about paternity test analysis.

Bold And The Beautiful Spoilers – Until Hard Paternity Evidence Obtained

It’s not logical to simply assume Finn is the father of Steffy’s baby after all that’s happened. Doing so would establish another reveal shoe drop in the future.

Here’s hoping that Finn is tested, that the results are analyzed while Dr. Campbell (Tina Huang) is watching. Having Steffy’s doctor be involved in any mischievousness would be a bit too much, so her word would be valued.

There’s no need to present scenes where the above plays out. Some simple lines can be exchanged between the principal characters in order to seal this part of the storyline.

The writing staff has done a fine job in creating a new regular character. Finn is the good guy Steffy has needed for a number of years, while Liam has been vacillating between Steam and Lope.

A likely sizable contingent of viewers are happy that Steffy and Finn are the parents of the baby. Their daughter or son will be born in the spring, based on how far along Steffy appears to be in the pregnancy.

With a fully resolved paternity issue and Steffy accepting Finn’s marriage proposal, Sinn can have a clean start.