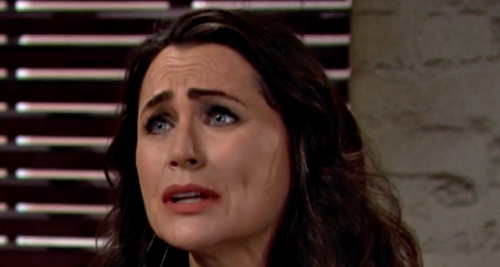 The Bold and the Beautiful (B&B) spoilers tease that Eric Forrester (John McCook) may shock Quinn Forrester (Rena Sofer) by reversing his divorce decision. Will Eric push his wife to build a life with Carter Walton (Lawrence Saint-Victor)?

B&B fans know this arrangement hasn’t been working out very well on Eric’s end. It’s been hard for Eric since he can’t satisfy Quinn’s passionate desires himself. Eric wants to be the one who gives Quinn what she needs, but his issues run even deeper than that.

Thanks to the support Katie Logan (Heather Tom) has been offering, Eric’s on the verge of having a major epiphany. Katie will get Eric to consider why he was willing to go to such extremes to make this marriage stick.

This is about more than just Eric’s desire to keep Quinn happy.

It’s also about Eric’s desire to keep Quinn by his side in general. Katie has repeatedly suggested that Eric’s afraid of being alone – and Eric will ultimately realize she’s right.

It’ll dawn on Eric that he doesn’t want to be alone and that’s why he’s been trying so hard to make this arrangement work.

Of course, Eric knows the fear of loneliness isn’t a good enough reason to reunite with someone. He expressed a similar idea during his conversation with Katie about Bill Spencer (Don Diamont).

That means Eric’s realization could lead to big changes that’ll blindside Quinn and lead to heartbreak.

Eric might tell Quinn that despite the love they once shared, it’s time to move on.

It’s not healthy for Eric to just hang around waiting for Quinn to be done with her boy toy. This arrangement is making things worse instead of better – at least for Eric.

Quinn may argue that they can just drop the arrangement then, but Eric may wonder if that’s something she really wants to do? He might even point out that Quinn has surrendered to temptation before and could do it again.

Eric certainly won’t blame Quinn for his own ED, but he’s not to blame for it either. It’s just an unfortunate issue that Eric has to deal with, but he’s chosen the wrong strategy.

Once Eric realizes the fear of being alone is behind his latest actions, he might urge Quinn to just be with Carter completely.

Eric may argue that he only ripped up the divorce papers because he was afraid of his own loneliness and suggest that’s not something that’ll make a successful marriage long-term.

Will Quinn walk away and begin a new chapter with Carter or try to fight for her relationship with Eric?

The Bold and the Beautiful spoilers say some bombs are set to drop on the CBS soap, so stay tuned.

CDL’s where you want to be for fantastic Bold and the Beautiful spoilers, news and updates, so pop back in frequently.