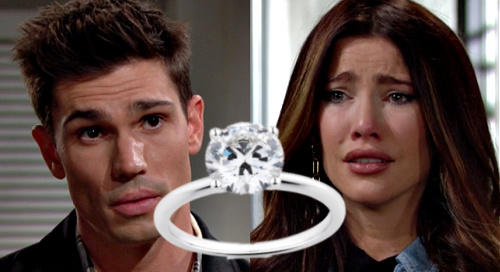 The Bold and the Beautiful (B&B) spoilers tease that an overheard discussion will be a game-changer during the week of March 1-5. Someone will do some eavesdropping and whatever he or she learns will alter the route that a couple in love takes.

That’s all very cryptic – and it’s intentional on B&B’s part. The show’s holding back on the key details to preserve the surprise, but let’s consider where they might be headed with this. For starters, the man clue is the part about this being a couple in love.

Wyatt Spencer (Darin Brooks) and Flo Fulton (Katrina Bowden) might be a good fit for that since they’re the most stable couple on canvas at the moment.

“Sinn” also happens to be one of the show’s hottest duos right now, so it’s easy to see why B&B might want to keep their plot details under wraps. That’s especially true if marriage is involved! It’s easy to imagine Finn overhearing Steffy and realizing that she doubts his commitment.

Although Steffy will have faith in Finn’s promises at first, she could battle doubts as Hope Spencer (Annika Noelle) and Liam Spencer (Scott Clifton) officially fall apart. It could leave Steffy wondering if Finn will end up throwing in the towel like Hope did because of this pregnancy.

It seems fitting to have Hope decide on divorce while Finn decides on a marriage proposal. This story is highlighting two different versions of the paternity aftermath – one where Hope can’t get past it and one where Finn can.

Having one marriage end while another is on the verge of beginning would be a nice touch.

Regardless, Steffy will have a reason to be concerned after Finn and Liam compete for her approval. It’ll lead to some friction, so Finn will be riled up about Liam and the “Steam” baby again.

That could make Steffy wonder if her relationship’s going to survive and set up a bleak discussion for Finn to overhear.

The next clue talks about the eavesdropping altering the route this in-love couple takes. Finn probably wasn’t planning on popping the question just yet, but he still sees a future with Steffy.

If Finn realizes he needs to prove his commitment and reassure Steffy that he’s all in, he might change his route by proposing sooner than he ever expected.

Regardless, it’s fun to ponder these riddle types of Bold and the Beautiful spoilers. It seems like Finn’s proposal would be a great way to wrap up Jacqueline MacInnes Wood’s stint before her maternity leave.

Finn might offer an engagement ring in response to any doubts that creep in for Steffy. It could set up a new “Sinn” chapter upon Steffy’s return.