The Bold and the Beautiful Spoilers: Finn’s Fatal Flaw – Is Doc Dangerously Obsessed With Steffy? 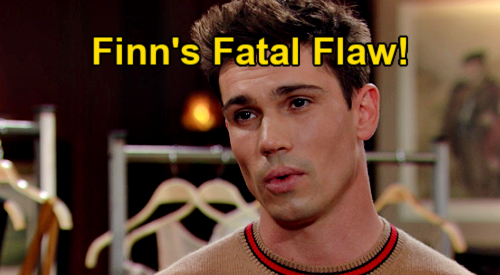 The Bold and the Beautiful (B&B) spoilers tease that John “Finn” Finnegan (Tanner Novlan) seems to be the total package – he’s handsome, a successful doctor, and he’s intensely devoted to Steffy.

As B&B viewers know, Finn even has the stamp of approval from Ridge Forrester (Thorsten Kaye), who was very impressed with how Finn has stood by Steffy even though she’s carrying Liam Spencer’s (Scott Clifton) baby.

Certainly, the situation with Steffy’s pregnancy isn’t ideal for her or Finn by any shape of the imagination, but Finn is committed to making things work no matter what.

It really seems like there’s nothing that will deter Finn from Steffy, and that could make him seem like just the perfect man.

But given that this is a soap, and that most characters end up with some very human flaws (or worse), there’s bound to be some way in which Finn is going to falter at some point.

After all, this is the show that has had Liam waffling between Hope Spencer (Annika Noelle) and Steffy for years and that has Bill Spencer (Don Diamont) serially cheating on Katie Logan (Heather Tom) with Brooke Forrester (Katherine Kelly Lang).

For dramatic value, Finn is going to need to have some kind of flaw. Perhaps Finn will end up having a long-lost wife that he never told Steffy about, or some seriously bizarre family-of-origin drama in his past that will come back to haunt him.

Or maybe Finn’s mom is a total psycho who will come and cause problems for him and Steffy.

Given that Finn is so devoted to Steffy, perhaps his fatal flaw will be that he gets a little too obsessive about her. According to B&B spoilers, Finn is going to pay Liam a visit at Spencer Publications, where he’ll lay down the law about his new set of boundaries for Steffy.

Might Finn get a little too strict about Steffy and protecting her from the likes of Liam in the future?

Maybe we’ll see the control freak side of Finn come out as Steffy’s pregnancy develops. Perhaps Finn will get a little too into protecting Steffy and run the risk of alienating her altogether.

It will be interesting to see what develops with Finn and his personality over time, but given how strongly he’s bonded to Steffy, he could turn seriously, even dangerously, obsessed!

Do you think that Finn will ever break out of his “Mr. Nice Guy” persona? Could he become obsessed with Steffy?

Stay tuned to B&B and don’t forget to check CDL as often as you can for the latest Bold and the Beautiful spoilers, updates, and news. Check out our daily episode recaps, too!