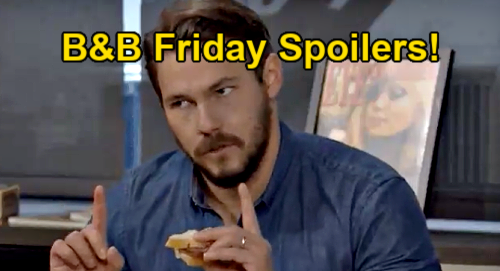 The Bold and the Beautiful spoilers for Friday, January 22, tease that Liam Spencer (Scott Clifton) and Wyatt Spencer (Darin Brooks) will continue their conversation at Spencer Publications.

As B&B viewers know, Liam has just confessed his affair with Steffy Forrester (Jacqueline MacInnes Wood), and Wyatt is still trying to process that plus the fact that Steffy is now pregnant.

Well, Wyatt is still pretty much in shock about the news, and on Friday’s episode, he’ll probably want more information about what happened to lead Steffy and Liam to sleep together.

Liam will recount the whole story about how he went from Thomas Forrester’s (Matthew Atkinson) apartment straight to Steffy’s house, where he started drinking and then ended up sleeping with Steffy.

Wyatt will probably be supportive of his brother on some level, but he’ll also call out Liam for what he did to Hope Spencer (Annika Noelle) and potentially to his family with Beth Spencer (River Davidson and Madeline Valdez) and Douglas Forrester (Henry Joseph Samiri).

Of course, this won’t be news to Liam, so we might see some arguing between the brothers on Friday’s episode.

Still, ongoing B&B spoilers say that Wyatt will be there for Liam as Liam goes through some truly horrible times, so it looks like Wyatt will end up putting aside his judgment and supporting Liam in figuring out his next move.

Perhaps Wyatt will also support Liam as he waits around for the results of Steffy’s paternity test to come back.

Meanwhile, on the new episode of B&B on Friday, January 22, things will heat up around Forrester Creations.

As B&B viewers know, Zoe Buckingham (Kiara Barnes) recently asked Zende Forrester Dominguez (Delon de Metz) how he felt about her, and Zende basically told her that there was not future there.

Zende is good friends with Carter Walton (Lawrence Saint-Victor) and that’s a line he will not cross.

Well, it seems that Zoe’s not going to give up in her quest to get Zende to admit his feelings for her. According to B&B spoilers, Zoe will be openly flirting with Zende at the office while Ridge Forrester (Thorsten Kaye) is around.

Perhaps Ridge will happen upon the scene and overhear as Zoe’s coming on strong to Zende – whatever the case, it seems that Ridge will pick up on what’s going on.

And once Ridge notices the vibe between Zoe and Zende, it’s probably only a matter of time before he spills what he witnessed to Carter. After all Ridge and Carter are good friends, and Ridge probably won’t want Carter to think that Zoe’s faithful when she’s being openly flirty with another man.

We’ll see what Ridge does with what he notices.

Friday’s all-new episode of B&B is going to be terrific, so be sure to stay tuned to the CBS soap! Stick with CDL for all your Bold and the Beautiful spoilers, updates, and news. We’re your go-to source for all the soaps!