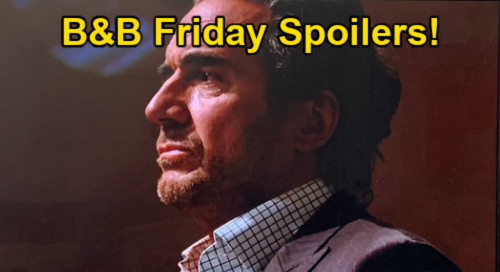 As B&B viewers know, Ridge has just walked in to find Zoe urging Zende to find out if they’re meant to be together.

More specifically, Ridge walked in just as Zoe tried to approach Zende for a kiss, but Zende stepped back after urging Zoe to think about Carter Walton (Lawrence Saint-Victor) and his feelings.

The good news for Zende is that Ridge witnessed him doing the honorable thing and resisting Zoe’s advances. But the news isn’t so good for Zoe, who has just thrown herself at Zende right in front of Ridge.

Well, B&B spoilers say that Ridge is going to want some answers from Zoe and Zende about what’s going on between them. Let’s hope that Zoe does the right thing and takes the responsibility for being at the mansion and for putting Zende in a truly difficult and uncomfortable position.

Of course, Zoe may not know how much of the scene Ridge witnessed, so she might not be honest.

If Zoe does try to make this situation out as a mutual attraction and pull between herself and Zende, then Ridge is probably going to explode. After all – it was very clear from Zoe’s words and Zende’s actions that Zoe was the one coming on to Zende.

Ridge isn’t going to like this one bit, and he may demand that Zoe needs to go straight to Carter and come clean about what she’s done.

Meanwhile, on Friday’s new episode of B&B, Paris Buckingham (Diamond White) is going to realize that it’s time for Carter to know the truth about what Zoe has been doing.

As B&B viewers know, Paris and Carter are together in the Forrester Creations CEO office, and Carter is once again gushing about how he and Zoe are going to set a wedding date and how happy he is.

Well, whether Paris will end up getting to tell Carter about how Zoe has been playing him and flirting with Zende remains to be seen.

Ongoing B&B spoilers indicate that Zoe will be worried about Carter learning her secret, and that she’ll want to set an immediate wedding date with him, which indicates that Paris could get interrupted as she’s talking with Carter.

Of course, since Ridge will be onto Zoe’s secret, it’s probably only a matter of time before Ridge tells Carter anyway…unless Zoe manages to get Ridge to keep her seduction attempt on Zende a secret, which is probably pretty unlikely.

The bottom line is that Zoe’s world will probably start crumbling soon, one way or another.

Friday’s episode of B&B is going to be terrific, so be sure to tune in so you don’t miss any of the drama! Keep up with CDL and we’ll be sure to keep you informed about all the latest Bold and the Beautiful spoilers and news.