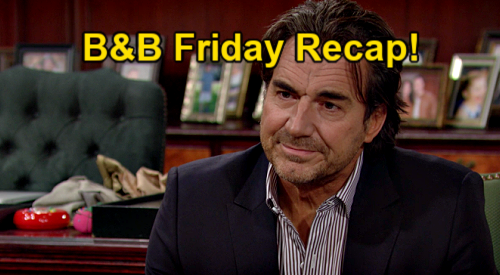 Ridge was worried about Carter Walton (Lawrence Saint-Victor), and Brooke agreed that Carter needed to proceed with caution when it comes to Zoe Buckingham (Kiara Barnes). Ridge said that Carter’s trust in Zoe had taken a major hit.

Brooke wondered why Zoe wanted to sabotage the relationship, and she speculated that perhaps Zoe was afraid of committing to marriage. Ridge noted that Zoe asked him to talk to Carter on her behalf, but that what was important was what Carter thought and felt.

Ridge told Brooke that Carter deserved a woman with eyes only for him, and that he advised that Carter should slow down and take a breath to see if Zoe’s really the woman for him.

Meanwhile, over at Carter’s loft, Zoe told Carter that she was not letting him give up on their relationship. Carter said that he wasn’t up for this, and that they were “broken.” Zoe said that she knew it, and that it was up to her to put them back together.

Carter noted that Zoe threw them away by flirting with Zende Forrester Dominguez (Delon de Metz), and he paced unhappily as he ranted about how he had wanted a life with Zoe.

Zoe insisted that she made a mistake, and that Carter shouldn’t give up on them. “You’re the one who gave up on us,” Carter fumed. Carter thought that Zoe played him for a fool, and that maybe he bored Zoe and she wanted to trade up for Zende.

“I wish I could believe that, but it looks like you were trying to trade up with Zende,” Carter said angrily. Zoe said that she owned it, and that she was distracted by Zende.

Zoe explained that the men in her life hadn’t treated her well, starting with Reese Buckingham (Wayne Brady) and ending most recently with Thomas Forrester (Matthew Atkinson).

Carter insisted that he wasn’t any of those men from Zoe’s past, and Zoe agreed that Carter was a much better man, but that she got scared of the commitment and of it all falling apart.

Zoe said that she was now more scared of losing Carter forever, and that she wasn’t scared to be with Carter going forward.

Zoe proclaimed that she wanted to marry Carter and have his children and a future with him. “I think that you are my person,” Zoe begged, saying that she knew that Carter could forgive her. “I will make sure that you’re not sorry for the rest of our lives,” Zoe went on. “Do not shut me out – will you give us a chance?”

At the Forrester mansion, Zende told Paris Buckingham (Diamond White) that surprises were his specialty. Paris gushed over the house and the beautiful view. Zende said he liked the view right there in the living room, and he said that he hired a caterer for the evening. Paris seemed impressed.

Then Zende told Paris that he kind of designed a dress for her and that it was upstairs for her to try on. Paris went up and later came downstairs in the beautiful blue gown. Zende said that Paris was his muse, and that tonight she was going to be the lady of the manor.

Zende toasted to Paris, saying that he was glad she was in his life and that he hoped they could walk the future road together.

There’s a lot of B&B drama heating up, so stay tuned! We’ll be sure to keep you informed on all the latest Bold and the Beautiful news and spoilers, so stick with CDL.