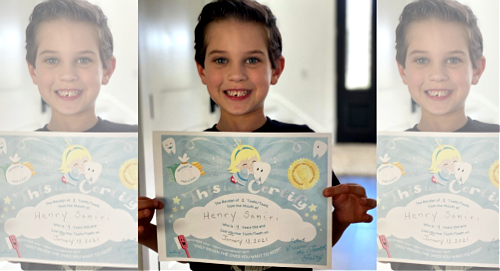 The Bold and the Beautiful (B&B) spoilers has some great news to pass on about a big milestone for a young B&B star. Henry Joseph Samiri, who portrays Douglas Forrester on the CBS soap, recently shared with his Instagram followers that he lost his first tooth. This is a very big deal for a kid, and Henry was happy to share his news.

Henry posted a picture of himself smiling big and holding a certificate from the tooth fairy commemorating the big event. The certificate reads: “This is to certify the receipt of 1 tooth from the mouth of Henry Samiri, who is 7 years old and lost his tooth on January 13, 2021.”

Henry lost a bottom tooth, which is apparent in the picture.

Henry’s caption for the photo reads: “My newest milestone!! So happy to have lost my FIRST tooth. #firsttooth #toothfairy #milestones #smile #toothless #gettingolder.”

Henry’s co-stars and fellow soap actors have been weighing in on his great news. Annika Noelle (Hope Spencer, B&B) replied to Henry’s announcement by saying: “Congratulations, Henry!!!” Henry replied to Annika by saying, “Thanks, Momma!”

Scarlett Fernandez (Charlotte Cassadine, GH) also wished Henry well, commenting: “Exciting!!!” Henry’s fans have been offering their congratulations and well wishes as well. For example, one person wrote: “Hope the tooth fairy was generous!!!” And someone else commented: “One down and many more to go!!”

It’s been a little while since B&B viewers have seen Henry on screen as Douglas Forrester, but we’re hoping that we’ll see him again soon.

Now that his on-screen mom Hope is estranged from Liam Spencer (Scott Clifton), perhaps Douglas will emerge to champion a future relationship between Hope and his dad Thomas Forrester (Matthew Atkinson).

Viewers will have to keep an eye out in the future to see if Henry appears on screen with his tooth missing in the coming weeks. One thing’s for sure – Henry is growing up, and we love his missing tooth smile!

We hope the Tooth Fairy treated Henry well and we wish him luck with the rest of his teeth! Stay tuned to B&B and don’t forget to check CDL regularly for all of your Bold and the Beautiful spoilers, daily episode recaps, and news.