The Bold and the Beautiful Spoilers: Hope Accuses Steffy of Holding Onto Liam – True Feelings Come Out 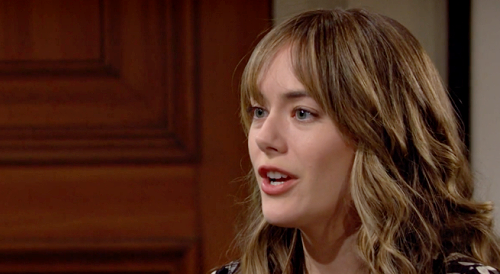 The Bold and the Beautiful (B&B) spoilers tease that Hope Spencer (Annika Noelle) may accuse Steffy Forrester (Jacqueline MacInnes Wood) of not letting Liam Spencer (Scott Clifton) go. Hope’s true feelings will come out in an emotional confrontation, so let’s talk about her upcoming accusation and how Hope will react.

During the week of November 29-December 3, B&B spoilers say Steffy and Liam will meet for a strategy session.

They’ll be in full agreement about doing whatever they can to make sure John “Finn” Finnegan (Tanner Novlan) and Hope stay away from their criminal birth parents, but Hope certainly isn’t going to approve.

Sheila is obviously a far more over-the-top character and seems capable of far worse than Deacon at this point.

Deacon has honestly changed and wants to do the right thing, even if he’s been caught up in Sheila’s drama for a bit. Hope feels like she knows Deacon’s heart and just wants an opportunity to have him in her life.

Hope’s not asking for much here, but Liam and Steffy will team up to shut down Hope’s attempt to bond with her father.

That’ll lead to Hope’s livid outburst and an accusation that Steffy didn’t see coming. Hope will accuse Steffy of something that catches her off guard and intensifies the fight that’s brewing.

Since Steffy will strategize with Liam right before this faceoff with Hope, Liam’s role in all this could be important.

After all, Liam has often been at the center of Steffy and Hope’s wars many times in the past.

Hope may argue that Steffy is using this whole situation to control Liam. She might act like Steffy still hasn’t let Liam go and rant about Steffy trying to bond with Liam through their daddy issues.

Whatever the case, Steffy won’t take kindly to whatever Hope accuses her of. She’ll fight back and most likely deny whatever accusation Hope hurls out.

Things will get heated between Hope and Steffy, so we’ll see if Liam steps up to play peacemaker eventually.

The Bold and the Beautiful spoilers say Steffy and Hope’s showdown will bring some exciting scenes, so stay tuned.

CDL will have all the sizzling Bold and the Beautiful spoilers, updates and news you need, so drop by often.