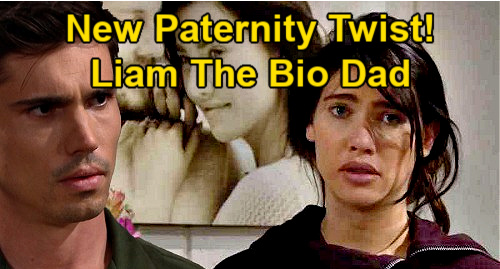 There are certainly plenty of “Sinn” supporters who were hoping for this curveball, so it’s nice to see it playing out on screen and giving this couple a child of their own.

However, longtime B&B viewers will tell you that the show seems to have an obsession when it comes to Liam Spencer (Scott Clifton). Liam’s been tangled up in Steffy and Hope Spencer’s (Annika Noelle) lives for years, so is that really going to change forever?

When it was first revealed that Steffy was pregnant, many fans felt like it’d be hard for the show to pass up another Spencer kid. Liam tends to get all the women and all the children!

Is this Finn paternity change meant to show a genuine shift in the direction of the writing – or could Finn’s joy with Steffy become short-lived?

Some Bold and the Beautiful fans are worried about the possibility of Finn getting the rug pulled out from under him. Finn’s a newer character and doesn’t have the same family connections on canvas as Liam.

It wouldn’t be all that surprising if B&B pulled another paternity switcheroo down the road and revealed that Liam was the true father after all.

Right now, we only have Vinny Walker’s (Joe LoCicero) word to go on. Vinny was a lab tech at the hospital where Steffy had her paternity test done, but this guy isn’t going to win any awards for being the smartest.

Although Vinny thinks he’s an expert now, who’s to say the original test was even run properly? For all anyone knows, the original results – the ones Vinny changed about Finn being the father – may have been incorrect.

The point is B&B writers could still pull a fast one and make Liam the bio dad somewhere down the line, especially if Finn doesn’t end up staying on the show indefinitely.

It’s a concern in the soap world where paternity results can change multiple times depending on the story the writers want to tell.

Do you think Finn will stick as the father permanently? Is it a done deal that Finn and Steffy’s baby will remain their baby – or could Liam be revealed as the father after all sooner or later? We’ll provide updates as other B&B news becomes available.