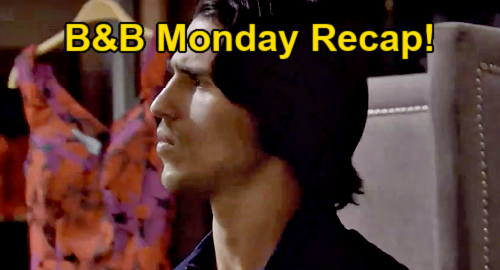 Finn had brought flowers for Steffy and said that he couldn’t wait to walk into the future with her.

Ridge positively beamed as Finn told Steffy that she looked beautiful. Ridge praised Finn, saying that a lot of guys would have walked away, and that it takes a big man to stick around. Finn said that he loved Steffy and that he’d be right by her side for whatever comes.

After Ridge took, off, Finn fussed over Steffy, wondering about her stress levels. Steffy appreciated Finn’s concern, saying that she didn’t slow down when she was pregnant with Kelly Spencer (Colette and Avalon Gray) and that she wasn’t going to slow down now, either.

Steffy said that she wished this child was hers and Finn’s.

Finn urged Steffy not to be sad, and that he’d be a positive presence, influence, and source of love for the baby. “This child will be blessed to have you just like I am,” Steffy said.

Finn said that they’d be a family, and that he’d take Steffy however she comes. Steffy again wished that things were different, and Finn embraced her tenderly.

In the backstage area of Forrester Creations, Thomas Forrester (Matthew Atkinson) and Hope Spencer (Annika Noelle) were working, but Hope was a million miles away.

Vinny Walker (Joe LoCicero) approached the area, and he smiled slightly as he overheard Thomas offering to help Hope or be there for anything she needed.

Vinny made his presence known, saying to Hope that he heard about Steffy having Liam’s kid. “Ouch,” Vinny said callously, adding that it was good that Thomas was there for her.

Thomas looked appalled by this. Hope took off, and Thomas questioned Vinny about what he thought he was doing.

Vinny ranted about how Liam was the one who was in the wrong, and that hope needed Thomas more than ever. “The paternity test locks it in – it’s Liam’s kid,” Vinny insisted.

Thomas asked why Vinny seemed so happy about this, and Vinny went on, saying that the fetal DNA didn’t match Finn’s, which made the baby Liam’s.

Thomas did a double take, wondering exactly when Vinny became an expert on paternity tests. “I’ve been working at the lab for a while,” Vinny said nonchalantly.

Thomas looked skeptical, especially when Vinny said that Thomas would think back to this conversation later and thank him.

Over at Spencer Publications, Liam talked with Wyatt Spencer (Darin Brooks) and Flo Fulton (Katrina Bowden). Liam lamented to Wyatt and Flo about how this new reality wasn’t what Hope signed up for and about how Steffy was carrying his baby.

After Liam rehashed the whole mannequin story, Flo told Liam to stop beating himself up, and Liam said that he’d do anything to make up for the hurt he caused.

At the cabin, Hope arrived to find Liam there. Liam said that he hoped that Hope hadn’t closed her heart to the possibility of them reuniting. Liam expressed his regret, and Hope said that she believed that Liam was very sorry, but that it didn’t make the pain go away.

That was a great episode of B&B, and there’s plenty more in store for this week, so stay tuned! Keep checking with us here at CDL, and we’ll keep you up to speed so that you don’t miss any of the new Bold and the Beautiful spoilers, daily episode recaps, or news.