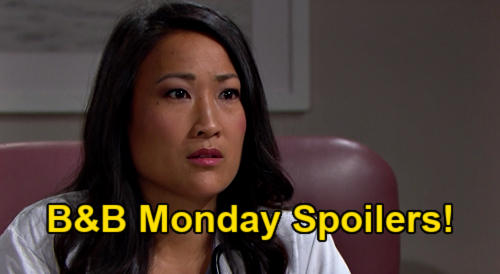 The Bold and the Beautiful spoilers for Monday, January 25, tease that Zoe Buckingham (Kiara Barnes) will reel over what she’s just discovered on her phone. As B&B viewers know, Zende Forrester Dominguez (Delon de Metz) was having phone issues and apparently did a global reset on his phone.

This caused his unsent text to Zoe from a while back to go through and Zoe just read it.

Of course, that text told Zoe to not move things along with Carter Walton (Lawrence Saint-Victor) and was from the night that Zoe and Carter first made love.

Zoe will now have some big decisions to make, and it looks like she’ll spend some time on Monday’s episode contemplating what to do.

Zoe’s in a real predicament now, since Zende is refusing to entertain the idea of exploring the spark between them – that’s a line that Zende just won’t cross, due to his friendship with Carter.

Ongoing spoilers for the week of January 25-29 indicate that Zoe will eventually confront Zende about the text, but it doesn’t look like she’ll get that opportunity on Monday’s episode.

Zoe should be feeling some real feelings of “what if” and she’ll probably realize that if she had received that text, her life might look very different than it is right now.

Meanwhile, on the new episode of B&B on Monday, January 25, Steffy Forrester (Jacqueline MacInnes Wood) will have an uncomfortable discussion with her OB-GYN, Dr. Campbell (Tina Huang).

As B&B viewers are aware, Dr. Campbell has just confirmed for Steffy that she is indeed pregnant, and Steffy has indicated that she needs a paternity test done.

Of course, Dr. Campbell might be feeling some deja vu, since Steffy had a paternity test during her pregnancy with Kelly Spencer (Colette and Avalon Gray), back when she thought there was the possibility that Bill Spencer (Don Diamont) could be the father.

Dr. Campbell will probably get the process started quickly this time around, as Steffy will want a swift answer.

This time, either Liam Spencer (Scott Clifton) or John “Finn” Finnegan (Tanner Novlan) will be the father of Steffy’s baby, and according to B&B spoilers, tensions will be running high as the testing gets underway.

It looks like it’s going to be a few stressful days as Steffy, Finn, Liam, and Hope Spencer (Annika Noelle) anxiously await an answer.

Monday’s episode sounds terrific, so stay tuned! We’ll give you updates throughout the weekend as more B&B news comes in. Stick with the CBS soap and be sure to keep CDL at the ready for all the latest Bold and the Beautiful spoilers, updates, and news.

Let’s shine together! ✨ #BoldandBeautiful is new weekdays on @CBS and @CBSAllAccess. 💙 pic.twitter.com/kCU18WXF1n