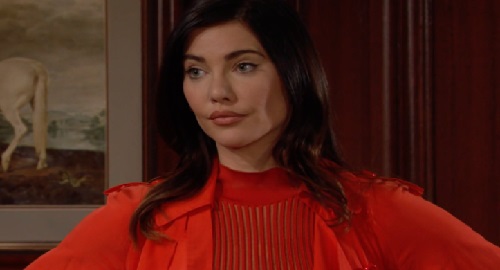 At Brooke Forrester’s (Katherine Kelly Lang) place, she talked to Ridge about Deacon as well as Hope’s desire to have her dad in her life. Brooke argued that they couldn’t make decisions for Hope since she was a grown woman, but Ridge thought they were entitled to make choices about who was on the premises.

Ridge urged Brooke to see why Deacon should be banned and thought they had to get him out of Hope’s head. He griped about Deacon representing such a terrible life chapter for Brooke, but she protested that Deacon was Hope’s father.

Ridge grew frustrated, but Brooke cut off the tense conversation and insisted they should trust Hope’s judgment. Meanwhile, Deacon accepted a cup of coffee from Hope at the cabin and mentioned that he was careful to avoid detection on his way there. He didn’t want to cause trouble for Hope with Ridge or Liam Spencer (Scott Clifton).

Deacon was so grateful for this opportunity to get to know Hope and promised he wouldn’t let her down. Hope was all about looking to the future and hinted that Brooke was coming around on the idea of Deacon being in the picture. It pleased Deacon to think that Brooke might come to see the man he is now, so Hope urged him not to give up on that dream.

Hope knew it would be hard to convince everyone else that Deacon wasn’t scheming, but she remained hopeful and thought they could just do their own thing until then. Although Hope had to leave for the office, she allowed Deacon to stick around for job-related calls at the cabin and embraced him before she headed out.

Soon after, Ridge found Deacon alone at the cabin and flew into a rage. He refused to listen to Deacon’s excuses and still wasn’t buying his “changed man” act. Ridge wanted Deacon off the property, but Deacon didn’t think Ridge had a right to kick him out of Hope’s home.

Just as Ridge grabbed Deacon to throw him out anyway, Brooke showed up and sought answers about the confrontation in front of her. Ridge said he was taking out the trash and was glad Brooke was there. He urged Brooke to back him up on getting rid of Deacon and telling him never to come back, but Brooke didn’t seem so sure about that!

At Forrester Creations, Steffy was grateful that Liam agreed about protecting the children. She acknowledged that the whole Deacon situation must be putting a strain on Hope and Liam’s marriage.

Since Deacon might use the kids to his advantage, Steffy warned that Liam needed to do whatever he could to stop Hope and Deacon’s bonding. Liam acknowledged the tight spot he was in since he didn’t want to be a controlling husband, but Steffy felt he’d just be protecting his family.

After Steffy brought up Brooke’s history with Deacon, she felt Hope should realize the toll having Deacon around could take on Brooke’s marriage to Ridge. Liam acknowledged that there was still a little girl inside Hope who longed for a dad, but he just couldn’t trust Deacon to do what was right.

As Steffy wondered how many times Deacon would have to disappoint Hope before she learned her lesson, Hope showed up and eavesdropped on the discussion outside the door. Steffy argued Deacon was never going to change and felt Liam had to do something.

After Steffy pushed Liam not to let Hope’s tunnel vision put his family at risk, Hope waltzed in and slapped her purse down. She announced she didn’t appreciate Steffy saying things to her husband that could cause problems in their marriage!