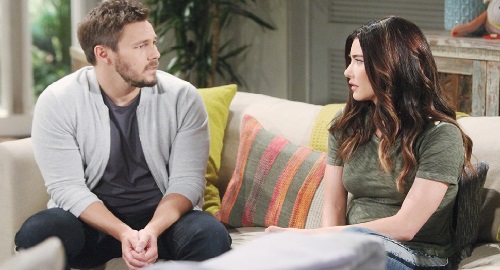 The Bold and the Beautiful (B&B) spoilers for Monday, November 29, teases that Steffy Forrester (Jacqueline MacInnes Wood) and Liam Spencer (Scott Clifton) will talk about how they don’t trust the Logan women – at least when it comes to their weakness for Deacon Sharpe (Sean Kanan). Brooke will prove their point by protecting Deacon and supporting Hope Spencer’s (Annika Noelle) dad decision.

First on Monday’s B&B episode, Liam and Steffy will get together to brainstorm. They’ll want to rid their blended family of the interlopers – namely Deacon and Sheila Carter (Kimberlin Brown). Steffy is doing everything she can to keep Sheila away and feels confident John “Finn” Finnegan (Tanner Novlan) will keep respecting her wishes.

Deacon is the more pressing issue to talk about since Hope’s adamant that he should be in her life. Hope wants Deacon to have a chance to be a real grandfather as well, so that’s something that’ll concern Liam and Steffy a great deal. Shielding the kids from their criminal grandpa will be an important goal.

That’s why Steffy and Liam will want to meet up to talk tactics and settle on a way to drive Deacon out of the picture permanently. Hope has a special weakness for Deacon and wants to see the best in him, but Liam and Steffy will agree their reconnection could be catastrophic.

Brooke has also fallen prey to Deacon’s good looks and charm in the past. The fact that Brooke slept with her daughter’s husband says a lot about Deacon’s power to win her over! Brooke values her relationship with Hope as well, so the last thing she wants to do is stand against Deacon and push Hope away in the process.

Liam and Steffy will feel like the Logan women in general have problems with their resolve on things like this. They won’t think Hope and Brooke can be trusted when it comes to what’s best for them, especially with Deacon manipulating the situation.

Ridge Forrester (Thorsten Kaye) won’t be a happy camper either since he’ll make a shocking cabin discovery on Monday’s episode. Deacon will be alone at the cabin when Ridge finds him and unleashes his fury.

It seems like Hope will get a visit from Deacon and ask him to sit tight while she goes up to the main house for Brooke. However, Ridge may accuse Deacon of trespassing and will definitely urge him to get out of the cabin this instant.

The Bold and the Beautiful spoilers say Hope and Brooke will arrive while Ridge is ripping into Deacon, so that’ll lead to Hope’s outburst and Brooke’s support. Brooke will think Deacon has a right to be in Hope’s home if she wants him there.

Ridge will be appalled over Brooke allowing Deacon on her property and willingly letting him be part of her daughter’s world. Since Ridge will be so disgusted, he’ll wind up walking out before he says something he can’t take back!

As for Hope, she’ll ultimately overhear part of Steffy and Liam’s discussion about her problematic bond with Deacon. Hope will eavesdrop on Liam and Steffy as they criticize the Logan women, so we’ll see if that comes at the end of Monday’s show to set up Tuesday’s mayhem.

We’ll deliver updates as other B&B news comes in. It sounds like Deacon will make even more waves, so stay tuned. CDL will have all the hottest Bold and the Beautiful spoilers, news and updates, so stop by regularly.