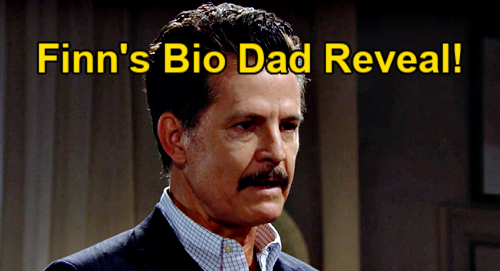 The Bold and the Beautiful (B&B) spoilers tease that a new preview video sets up the reveal of Jack Finnegan (Ted King) as John “Finn” Finnegan’s (Tanner Novlan) bio dad and shows Sheila Carter (Kimberlin Brown) will use the secret to her advantage. This birth mom isn’t going anywhere and will remind Jack of the bio dad bomb to guarantee it!

B&B’s last promo recaps some of the juicy drama that’s already played out surrounding dangerous Shelia. She’s a sinister nightmare as far as the Forresters are concerned, but Finn can’t help it if he still cares about his birth mother.

Nevertheless, Ridge Forrester (Thorsten Kaye) and his family have dealt with Sheila long enough to grasp the threat she poses.

Steffy Forrester’s (Jacqueline MacInnes Wood) reassurance hasn’t convinced Ridge that Finn understands, so he’ll want to have a chat with the doc himself.

Ridge will push Finn to notify them if Sheila gets in touch again since they have to be vigilant.

You really can’t be too careful when it comes to the infamous Sheila Carter and the lengths she’ll go to.

Finn will battle guilt over his secret exchange with Sheila, which consisted of her lengthy goodbye message and his heart emoji.

Of course, that emoji managed to motivate Sheila and made her more determined to get to know her beloved boy.

Sheila has scrapped her plan to ditch LA and now wants to park herself in Finn’s life for good. However, that idea won’t go over well with Jack – and he’ll be sure to let Sheila know she’s not welcome.

“Do yourself a favor and leave,” Jack warns in B&B’s preview video.

It’ll be part of Jack’s effort to intimidate Sheila into steering clear of Finn, Hayes Forrester Finnegan and anyone connected to this storyline.

“I’m not going ANYWHERE!” Sheila hisses back in the clip – and she’ll soon deliver a shocker to ensure she can stick around.

The Bold and the Beautiful spoilers say Sheila’s going to turn the tables by threatening to reveal another secret.

It turns out Finn is Jack’s biological son, so he just let Finn believe he was his adoptive father all these years.

Finn is actually Jack’s child with Sheila, but Jack lied to Li Finnegan (Naomi Matsuda) as well and will certainly want to preserve his marriage by keeping this info under wraps.

Sheila’s going to give Jack her demands and put him in a terrible situation, we’ll provide updates as other news becomes available.

The Bold and the Beautiful spoilers say Jack’s next secret is bound to do even more damage, so don’t miss all the action.

CDL will have other hot soap spoilers, news and updates for you, so stop by regularly.

Sheila’s making it clear…she’s NOT going anywhere! 👏 Don’t miss what happens next on all-new episodes of #BoldandBeautiful this week. pic.twitter.com/ai37bu2W9t