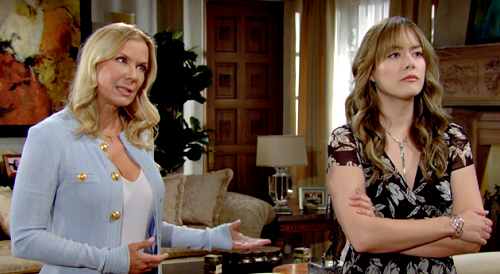 B&B spoilers reveal that Ridge arrives home to find Deacon inside his house. Ridge just made a pact with Liam Spencer (Scott Clifton) to do whatever is necessary to protect Brooke, Steffy Forrester Finnegan (Jacqueline MacInnes Wood) and Hope Logan Spencer (Annika Noelle) from Deacon and Sheila Carter (Kimberlin Brown).

Under normal circumstances, Brooke would kick Deacon out. However, Ridge reels over Brooke’s unexpected defense of the con man. Even though Brooke defends Deacon and Hope pleads her case, Ridge won’t change his mind.

It is confirmed that Ridge still asks Justin Barber (Aaron D. Spears) to dig up all the information he can on Deacon and Sheila.

During the week of November 8, Jack returns and pays a visit to Sheila. Jack plans on asking her out to lunch, but not for romantic reasons. Jack likely wants Sheila out of John “Finn” Finnegan’s (Tanner Novlan) life but is being blackmailed.

Before Jack and Sheila can finish their conversation, Finn shows up. Instead of scrambling to explain, Jack hides from his own son.

During the week of November 15, things will take an interesting turn, though. Jack’s secret about being Finn’s biological father is exposed. Understandably, Li is devastated.

The Bold and the Beautiful spoilers reveal that this isn’t just about Li being cheated on many years ago. It’s about Jack keeping this a secret from his wife for decades.

It’s also about Jack deceiving Li with a psychotic killer like Sheila. We aren’t even going to get into Jack putting Steffy and Hayes Forrester Finnegan in danger by giving into Sheila’s demands.

In Li’s eyes, she will see this as the ultimate betrayal to their entire family. A baby’s safety should always come first, not keeping a dirty little secret.

It’s possible that Li could decide that she’s done with Jack and file for divorce. Even though she will probably return home, she might not leave Los Angeles alone.

The Bold and the Beautiful Spoilers: Ridge Forrester’s Exit

Back in July 2021, Thorsten Kaye confirmed he would be taking an extended break from the show. We are already in November, which means Ridge’s exit story could be starting soon.

Feeling betrayed by Brooke defending Deacon and the two possibly rekindling their forbidden romance, that might not be the only thing that drives Ridge away.

While Deacon and Brooke are becoming a “real family” with Hope, Ridge and Li could bond over being betrayed. Is it possible that they might have an unexpected love connection and leave town together?

Hope’s ready to give Deacon a second chance…but she might be the only one. See what happens next on all-new episodes of #BoldandBeautiful this week! Watch the latest episodes on @paramountplus. pic.twitter.com/vKmD0JGQlA