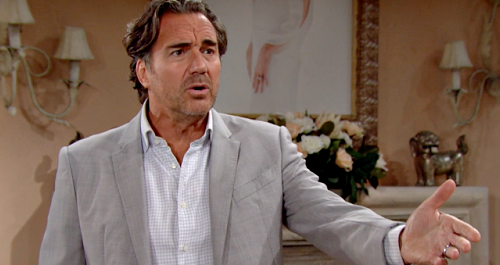 The Bold and the Beautiful spoilers reveal that Carter Walton (Lawrence Saint-Victor) and Ridge Forrester (Thorsten Kaye) get into a heated argument. Plus, Eric Forrester’s (John McCook) new demand of Quinn Forrester (Rena Sofer) could end the passion pact. It all might be too much for Carter, causing him to snap and turn to the enemy.

B&B spoilers reveal that Carter seems as if he’s the perfect man. It’s hard to imagine him losing his temper. However, everyone has their breaking point and one day, someone is going to push Carter too far.

It seems with everything that’s happened to Carter in the past six months and with more drama coming, the COO could snap.

Eric forgave Quinn and Carter for their fling and changed his mind about the divorce. However, once “Queric” got back together, an intimate secret was revealed.

Eric used his bedroom difficulty to encourage Quinn and Carter to continue sleeping together. Instead of continuing to reject the idea, “Quarter” ended up giving into temptation.

Ridge didn’t believe Quinn’s claim that she had permission to cheat. Once Eric confirmed the bombshell, though, Ridge was shell-shocked.

The Bold and the Beautiful spoilers for the week of October 11 reveal Ridge and Carter get into a heated argument. Normally, Carter would listen to Ridge vent and try to explain or apologize. That’s not going to happen this time, which is a warning sign that Carter’s had enough. By Friday’s episode, Eric will make a heartbreaking demand of Quinn, which must be to stop seeing Carter.

The Bold and the Beautiful Spoilers: Vengeful Alliance

It is teased that during the week of October 18, a heartbroken Carter will confide in a kindred spirit. That same week, Bill Spencer (Don Diamont) makes a request of Ridge and Brooke Logan Forrester (Katherine Kelly Lang).

Most of Bill’s scenes lately have revolved around Katie Logan (Heather Tom). However, Bill needs more to do in the soap than pine after a woman.

It’s possible that Carter might talk to Bill about his heartbreak. After all, Bill is also heartbroken and was betrayed by his right-hand man.

Bill might try to ask Ridge and Brooke to cut Carter some slack. However, Ridge will probably lash out as he’s furious with “Quarter.”

Plus, Ridge and Bill can’t stand each other. So, if Bill’s request is denied, then he could scheme to strike back at Ridge both personally and professionally… especially if Carter mentions Justin’s role in all of this.