The Bold and the Beautiful Spoilers: Sheila Is The Target – Steffy Defeats Finn’s Bio Mom? 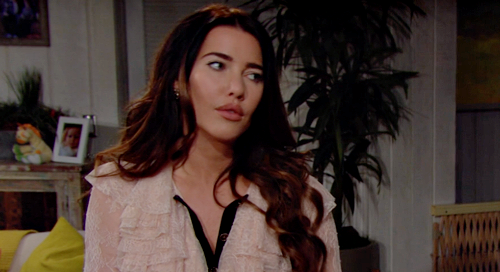 The Bold and the Beautiful spoilers document that Sheila Carter (Kimberlin Brown) has often been written as the villain on B&B and the original soap opera she appeared on, The Young and the Restless. That role establishes her as the tormentor, with the Forrester family being Sheila’s main target in Los Angeles, California.

Steffy Forrester (Jacqueline MacInnes Wood) got the response she hoped for. John Finn Finnegan (Tanner Novlan) told his supposed birth mother that he stands with his wife and their son.

Sheila was directly told that she could not be a part of his or Hayes Forrester Finnegan’s (Samantha Worden and Piper Harriet) life. End of discussion, no debate.

But the follow-up plea that Sheila tried to have with Steffy was intriguing, as it winked at an unpredictable future.

Bold and the Beautiful Spoilers – The Soap Must Be Fresh

Anyone could easily predict Sheila plotting whatever against Steffy. Over time Brown’s legendary alter ego would employ her plan and repeatedly disrupt the Sinn family’s existence.

Maybe Sheila would poison Steffy, rendering her alive but unconscious for an indefinite period. Finn would again be vulnerable to Sheila’s master manipulator schemes, implying that he would not know that his apparent mother was the cause of Steffy’s state.

Upon awakening, Steffy would learn that many weeks passed and that Sheila gained the needed foothold in Finn’s heart. The real one, rather than the emoji he sent via text. But would those projected events represent fresh soap?

Bold and the Beautiful Spoilers – Steffy Forrester Finnegan Is The Hero

It would be right to critique this section header. Steffy’s current name does not technically have Finnegan at the end of it.

Viewers recall that Steffy hesitated on filing the marriage paperwork at the courthouse because of Sheila. That choice had nothing to do with Steffy’s love for Finn, his love for her, or their son.

Instead, Steffy’s mind was blown by the incredible reveal that Sheila was Finn’s mother, Hayes’ blood relative grandmother, and her mother-in-law. But Steffy did not split from Finn as a result. That immediate outcome was encouraging and potentially a foreshadowing.

This happy couple had time to digest the news, were briefly apart and concluded that they are Sinn, not Sinn plus Sheila. That happened because Steffy forcefully confronted Sheila and told Finn to wise up. He did.

Bold and the Beautiful Spoilers – Looking Ahead On B&B

The B&B writing staff created an unexpected storyline in 2017 and 2018. Sheila suddenly reappeared but didn’t cause anywhere near the level of mayhem that she did in the past.

That Sheila comeback tale was rather tame in comparison to the many other dramatics that played out in days gone by. At the end of that brief tale, Quinn Fuller Forrester (Rena Sofer) defeated Sheila, which forced her to leave the mansion.

No real damage was inflicted on Eric Forrester (John McCook) or his family, other than a memorable wrestling match with Quinn. If Quinn could take Sheila down single-handedly, then Steffy likely could do one better.

Sheila is already telling herself that she will get Steffy. But are TPTB planning a surprise for Sheila where Steffy gets her instead?