The Bold and the Beautiful Spoilers: Steffy, Katie, or Flo – Who Says Yes To Marriage First? 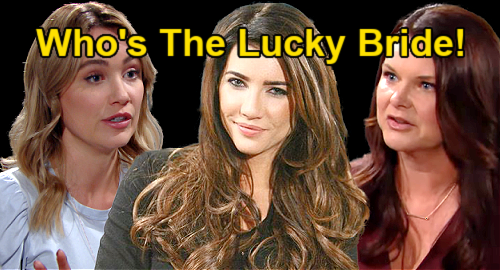 The Bold and the Beautiful spoilers tease that Steffy Forrester (Jacqueline MacInnes Wood), Katie Logan (Heather Tom), and Flo Fulton (Katrina Bowden) all face crucial decisions in the near future. Each lady has a man that she loves and wants to marry.

Teasers indicate that Steffy will feel compelled to leave Los Angeles, California, because of fallout that results from the paternity drama that plays out.

B&B fans know that Wood temporarily left the cast in recent weeks due to the birth of her second son. She, her husband, their baby, and their first-born son are all doing well.

So, Steffy’s on-screen presence will need to be addressed in a creative manner. One way to do so is by having Sinn get married, after whatever conflict plays out that involves Finn. This would be the most upbeat scenario that could happen.

Katie is in a forgiving mood. She listened to Wyatt’s plea and agreed that Flo needed to be fully forgiven and welcomed back into the Logan family.

The above development plays right into Bill’s hands, as he’s been hoping that his Katie would come back to him. But forgiveness was needed in order to make that happen.

Bill has been very open in admitting all that he’s most recently done. Bill’s taken full responsibility and has also allowed a significant period of time to pass in order to hopefully allow Katie to fully welcome him back into her heart. He never left, but she needed time to balance Bill’s indiscretion with Batie family considerations.

Katie is set to forgive Bill and to give him another chance. In this instance, remarriage, rather than marriage, would then be on the table.

Whatever nickname one wants to apply to the likable Wyatt and Flo or Flo and Wyatt pairing is okay. This couple works in either named order and under any nickname.

There has been no recent drama between this couple, including during the period when Sally Spectra (Courtney Hope) took the hint and took off for Genoa City, Wisconsin. She’s glommed onto Jack Abbott (Peter Bergman) since then.

Like both couples that were analyzed above, Flo and Wyatt are primed to tie the knot. Here’s hoping all three pairings marry. As to which duo goes first, that’s one of many reasons for the fans to keep watching.