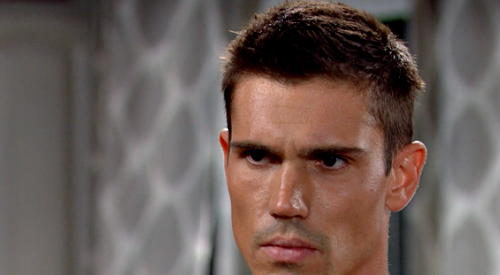 The Bold and the Beautiful (B&B) spoilers tease that Steffy Forrester (Jacqueline MacInnes Wood) may miss some John “Finn” Finnegan (Tanner Novlan) and Hope Spencer (Annika Noelle) romantic warning signs. Steffy may be too focused on her fears about Thomas Forrester’s (Matthew Atkinson) lingering obsession to realize Finn might be the greater threat to Hope’s marriage.

After Finn opens up to Hope about his Sheila Carter (Kimberlin Brown) issues, he’ll eventually feel guilty over a secret.

That could involve what Finn and Hope talked about – or the fact that they talked at all. Regardless, Finn won’t want Steffy to know how much he’s struggling.

It’s hard for Finn to push his birth mom away when she’s saying all the right things, even if her actions and history don’t line up.

Steffy is adamant that Sheila is a dangerous woman who must be kept at a distance, but Finn has longed for a relationship with his biological mother his entire life.

There’s always been a little piece of Finn missing, so now it’s tough since the missing piece is right there.

Finn just can’t reach out and take it since it’d mean disrespecting Steffy’s wishes – not to mention putting the kids at risk.

This is a difficult mess for Finn, who’ll lean on Hope and perhaps continue these confidential conversations.

That could be the secret Finn feels guilty for keeping during the week of October 4-8. Meanwhile, Steffy will be none the wiser as she grows concerned about Thomas’ desire to be with Hope.

Thomas has been clear about finding a healthier way to love Hope and only wanting her happiness now. He should repeat all that to his sister, but Steffy will battle worries about Thomas causing “Lope” drama again.

Unfortunately, Finn and Hope’s growing bond could be what causes problems instead. Sheila has a new plot coming up, so she could certainly use that connection to her advantage.

We wouldn’t put it past Sheila to make moves that push Finn in Hope’s direction. Sheila could even set up a fake affair if she can’t make a real one happen.

However, Finn and Hope will start by growing closer. It looks like Finn will share all the things he feels he can’t come clean to Steffy about, so that could bring trust and understanding.

B&B will have the foundation for a romance if they want to go there, but Steffy won’t see the potential threat right away.

The Bold and the Beautiful spoilers say Steffy will push Thomas to keep his feelings in check, but should she be more worried about Finn’s feelings – particularly with manipulative Sheila on the verge of more scheming?

CDL will have other thrilling Bold and the Beautiful spoilers, news and updates to read up on, so drop by regularly.