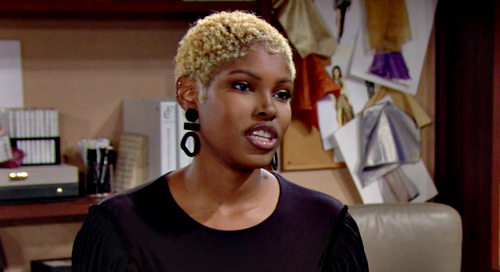 The Bold and the Beautiful (B&B) spoilers tease that Steffy Forrester (Jacqueline MacInnes Wood) and Paris Buckingham (Diamond White) are bound to fight over John “Finn” Finnegan’s (Tanner Novlan) broken promise. Finn’s wife should be appalled when the doc’s confidant defends his bond with Sheila Carter (Kimberlin Brown), so let’s consider how this will all play out.

Finn vowed not to see or talk to Sheila again, but he’s already texting with her and will continue to do so. Of course, this could easily escalate to phone calls and secret meetings, but even the texts alone are concerning.

Finn doesn’t seem to grasp the level of danger when it comes to Sheila – and it’s certainly a bad sign to be hiding things this soon after tying the knot.

Nevertheless, B&B spoilers say Paris will side with Finn after she learns what he’s up to during the week of August 16-20.

Paris will understand why Finn would want to at least speak with Sheila and see what she’s truly like. Just because Finn has a complicated birth mom doesn’t mean he wants to ignore her.

At the same time, Finn gets that Sheila has done serious damage and hates to rock the boat with Steffy.

Paris will understand the secrecy as well, so she’s poised to rush to Finn’s defense once Steffy finds out what’s going on.

Whether Steffy finds the texts or discovers the truth another way, she’s going to be furious over Finn going behind her back like this.

Since Paris will be firmly in Finn’s corner, she’ll no doubt have a showdown with Steffy.

Paris has been quite complimentary to both Steffy and Finn, but it should soon become clear that Finn’s the one she respects and adores most.

Steffy may be accused of being unfair, but she’ll probably feel like Paris is weighing in on things that are none of her business – things she really knows nothing about!

Paris might want to be careful considering Steffy is her boss and could kick her right out the Forrester Creations door.

Steffy could certainly kick Paris out of the cliff house and probably should under the circumstances. This is a matter that should be between Steffy and Finn, not Steffy and Paris.

Even so, Paris will probably try to make Steffy see things Finn’s way and rile her up in the process.

The Bold and the Beautiful spoilers say Paris will insert herself in Steffy and Finn’s marriage drama, so don’t miss what’s in store.

CDL’s where you want to be for hot Bold and the Beautiful spoilers, news and updates, so make us your go-to source.