The Bold and the Beautiful Spoilers: Thomas Heartbroken & Embarrassed Over Paris’ Rejection 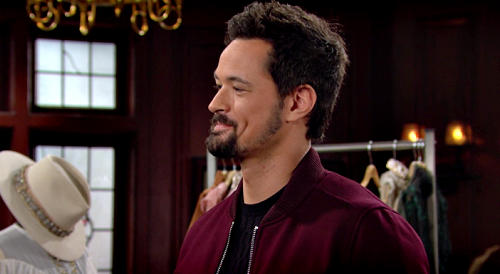 The Bold and the Beautiful (B&B) spoilers hint that Thomas Forrester (Matthew Atkinson) will be heartbroken over Paris Buckingham’s (Diamond White) rejection, so embarrassment could follow his grand gesture to win a chance at love.

B&B fans know Thomas is crushing hard on Paris and would love to have her as his own girlfriend.

Thomas admitted he was a bit envious of Zende Forrester Dominguez (Delon de Metz) and has no idea that Zende’s cooking up an engagement ring surprise.

The Bold and the Beautiful spoilers say Paris will be thrown for a loop over Thomas’ attempt to steal her away from Zende. It’ll shake Paris up on plenty of levels and leave her uncertain of how to respond.

Nevertheless, Paris will lean on Carter Walton (Lawrence Saint-Victor) in the aftermath.

Carter will help Paris try to process what happened with Thomas, so she’ll confess and offer updates on the whole experience.

We also know Paris will attend the upcoming Thanksgiving gathering with Zende.

The two of them will show up for the party Ridge Forrester (Thorsten Kaye) and Brooke Forrester (Katherine Kelly Lang) are set to host, so that proves Paris will reject Thomas and stand by Zende’s side at this get-together.

Steffy Forrester (Jacqueline MacInnes Wood) and John “Finn” Finnegan (Tanner Novlan) will also be part of this gathering. The same goes for Liam Spencer (Scott Clifton), Hope Spencer (Annika Noelle) and Carter, but what about Thomas?

There’s no good reason why Thomas should skip Thanksgiving dinner with his father and sister. It suggests that Thomas will want to keep his distance – and his embarrassment over Paris’ rejection may be the source of this desire.

Even if Paris lets Thomas down gently, she’ll continue to believe Zende is her future – at least for a while.

That could leave Thomas off licking his wounds somewhere, but maybe he shouldn’t give up just yet! Paris could still come around, so it’ll be interesting to see where the story goes from here.

B&B spoilers say Thomas will have to figure out what’s next after Paris pushes him away.

CDL’s where you want to be for sizzling Bold and the Beautiful spoilers, news and updates, so pop back in regularly.