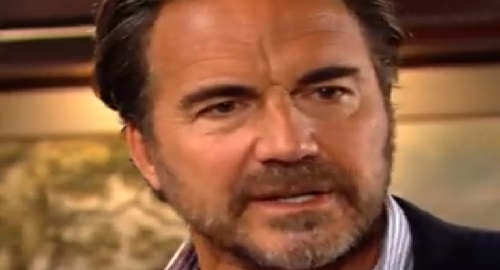 In Finn’s office, he’ll be working on some cases at his desk when Sheila enters wearing scrubs. Finn will no doubt want to know what Sheila’s doing there and who she tricked to make this happen. Sheila may admit the scrubs were her ticket to avoiding questions, though it’s also possible she’ll score a legitimate job there to be close to her son.

Finn will remind Sheila that she needs to keep her distance, but Sheila may argue that’s why she came to Finn’s office this time instead of showing up at the cliff house. She might act like she’s willing to respect the boundaries Steffy Forrester (Jacqueline MacInnes Wood) put in place on some level, but she can’t avoid Finn completely.

That’s especially true when Finn’s hurting – and he most definitely is right now since Jack Finnegan (Ted King) came clean about his deception. Finn’s world was turned upside down when he realized Jack had been keeping his paternity a secret all this time.

Jack fathered a child with Sheila due to their affair, so that’ll add to Finn’s complicated feelings for his birth mom. However, Sheila will assure Finn that she regrets her role in the cheating. She could never regret that Finn resulted from that affair, but she’ll be sorry he’s in pain and will point out she pushed Jack to come clean.

Sheila will urge Finn to accept the idea of a new beginning – one where they put all the lies and mistakes of the past behind them. While Finn mulls over Sheila’s plea, Brooke will get one of her own as Ridge fights for their future.

Ridge just put Brooke on the spot by asking her about her feelings for Deacon Sharpe (Sean Kanan), but Brooke may shut down the idea that she feels anything close to what she feels for her husband. That said, Brooke may admit she cares about Deacon as her daughter’s father and wants to respect Hope Spencer’s (Annika Noelle) desire to reconnect with him.

Ridge will make a powerful speech about the depth of his love and just how much he wants to protect her. That goes for Hope as well, but Ridge’s emotional spiel won’t accomplish much on Thursday’s B&B episode.

Brooke will continue to side with Hope, so that’ll add to Ridge’s frustration and bring even more conflict in their marriage before the week winds down. We’ll provide updates as other B&B news comes in.