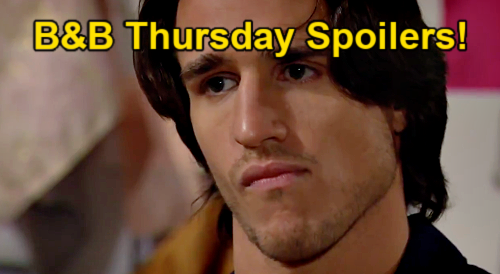 The Bold and the Beautiful spoilers for Thursday, February 25, tease that Steffy Forrester (Jacqueline MacInnes Wood) will once again offer a big apology to the people that she’s hurt.

As B&B viewers know, Steffy has been doing a lot of apologizing lately, as she feels tremendous guilt over carrying Liam Spencer’s (Scott Clifton) child. Well, it seems that Steffy will have more to say on the subject.

Perhaps Steffy will come across Hope Spencer (Annika Noelle) and Liam in the backstage area at Forrester Creations, where the two have been talking about the difficult situation they’re in.

Hope has told Liam yet again that she just doesn’t know if she can get past what he did now that there’s going to be a new baby in the picture. We’ll see if Steffy comes along to throw in her two cents.

As B&B viewers are aware, Thomas started to figure out that Vinny has access to the lab, and it sounds like it could be the same lab where Steffy and John “Finn” Finnegan (Tanner Novlan) had their paternity test run – the test that “showed” that Liam was the baby’s father.

Well, Thomas has just asked Vinny point blank whether he did something to mess with the paternity test results, to make it look like Liam was the father. Of course, this would be a very “Vinny” thing to do, since he’d love to see Thomas and Hope get together.

Thomas will likely keep pressing Vinny on Thursday’s episode, and we’ll see what Vinny has to say for himself.

Assuming that Vinny does admit to making the paternity test results show that Liam, and not Finn, is the baby’s father, then Thomas is going to have some big decisions to make.

Thomas will be in a position where he basically holds Liam, Hope, Steffy, and Finn’s futures in his hands, and he may have a moral crisis about what to do.

The Bold and the Beautiful spoilers for Thursday indicate that Thomas will decide to help Steffy and Hope in a most unusual way.

Could that mean that Thomas will spill the beans about what Vinny has done? If so, that would be a game-changer for Liam and Hope, and for Steffy and Finn as well.

We’ll see what happens here, but it’s looking like Thursday could be a pivotal B&B episode! Stay tuned to the CBS soap and we’ll keep you informed about all the latest soap news and spoilers. You can count on CDL for your Bold and the Beautiful updates, so keep coming back.