The Bold and the Beautiful Spoilers: Thursday, January 14 – Finn Lashes Out At Liam – Hope Tries To Keep The Truth From Brooke 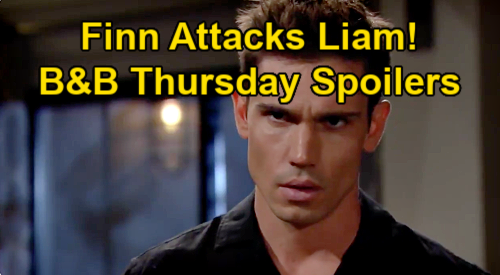 The Bold and the Beautiful spoilers for Thursday, January 14, tease that it will be a new day, and the news about Steffy Forrester’s (Jacqueline MacInnes Wood) pregnancy will have processed a bit for John “Finn” Finnegan (Tanner Novlan).

As B&B viewers will remember, Finn was horrified by Steffy’s reveal about her affair with Liam Spencer (Scott Clifton) but he agreed to try to work through it with her.

Finn really loves Steffy, and he wants a future with her despite what she did. Plus, Finn seems rather enthusiastic about the prospect of becoming a father, if indeed Steffy’s baby is his.

But even though Finn is willing to work things through with Steffy, it doesn’t look like he’s going to be willing to remain on decent terms with Liam, at least not in the short term.

According to B&B spoilers, Liam will drop by Steffy’s place, where he’ll encounter an irate Finn.

It looks like Finn will have a few things to get off his chest, and we’d like to think that Liam will just take his lumps and let Finn vent his frustrations – after all, Liam did involve Steffy in his personal affairs, which led to the one-night stand happening.

But since The Bold and the Beautiful spoilers say that accusations will fly between Liam and Finn, it looks like Liam’s actually going to fight back and have some words for Finn.

Who knows what Liam will say, but we’re betting that Finn will have none of Liam’s nonsense. In fact, we might just see Finn put his foot down and tell Liam to stay away from Steffy and keep away from his relationship.

Meanwhile, on the new episode of B&B on Thursday, January 14, Hope Spencer (Annika Noelle) will do her best to keep the truth about everything that’s happened from Brooke Forrester (Katherine Kelly Lang).

It appears that Hope will really be suffering, and she either won’t feel like talking about it, or she’ll have some other reason to keep the truth from her mom.

Perhaps Hope will just want to keep from having a breakdown, but chances are that Brooke is going to quickly realize that something’s very wrong with her daughter.

Hope will probably be running scenarios in her head, wondering what life is going to be like if Steffy’s baby does turn out to be Liam’s. All of their lives will change going forward – it’s got to be a lot for Hope to shoulder right now.

Still, Hope will probably realize that as soon as Brooke does find out the truth about Steffy’s pregnancy, then she’s going to be livid and a Forrester family war is going to break out, with Ridge Forrester (Thorsten Kaye) supporting Steffy and Brooke supporting Hope.

It might just be a scene that Hope isn’t yet ready to face, so we’ll see if she divulges the truth to Hope on Thursday’s episode.

Thursday’s episode of B&B sounds fantastic, so be sure to tune in! Keep checking in with CDL and don’t forget to check CDL regularly for the latest Bold and the Beautiful spoilers, updates, and news.

Our hearts are breaking for Finn right now. 💔 RT if you hope he’s going to be a father! #BoldandBeautiful pic.twitter.com/zNxdYg0sUB