The Bold and the Beautiful Spoilers: Thursday, January 21 – Wyatt Blasts Liam For Cheating With Steffy – Hope’s With Thomas 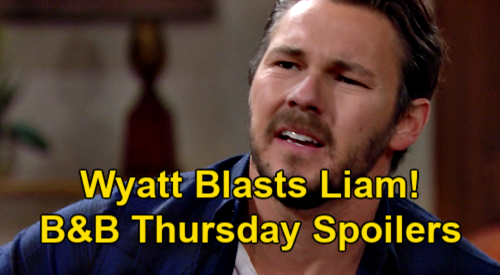 The Bold and the Beautiful spoilers for Thursday, January 21, tease that the action will be heating up on the CBS soap. But before we get to that, we have a quick programming note.

B&B won’t air on Wednesday, January 20, due to live coverage of the presidential inauguration on CBS. The next new episode that viewers will see will be on Thursday, January 21.

As B&B viewers will remember, Finn has just asked Steffy who she’d prefer to be the father of her child in her heart of hearts. Of course, Steffy has already told Finn that she wants him to be the father, but Finn’s now asking Steffy to dig deep and answer from her heart.

Well, chances are Steffy’s going to do her best to reassure Finn that she wants a future and a family with him. But since a part of Steffy would probably love for Kelly Spencer (Colette and Avalon Gray) to have a full sibling, this may be a difficult question to answer.

The real answer may lie somewhere in between, and Steffy may feel that whichever way the paternity test comes out, there will be some good to come out of it.

As B&B viewers know, Thomas has just overheard Hope’s conversation with Liam Spencer (Scott Clifton), and he now knows that Steffy’s pregnant and the baby could be Liam’s. Thomas seemed genuinely horrified by that news.

On Thursday’s episode of B&B, it looks like Thomas will do his best to comfort Hope as she tries to process everything that’s happened and mull over Liam’s big request for forgiveness and one more chance.

Thomas will apparently offer Hope a shoulder to cry on and he’ll probably at least try not to be judgmental regarding Liam. We’ll see if Hope opens up to Thomas fully.

Finally, Wyatt Spencer (Darin Brooks) will catch up with Liam, and he’ll hear Liam’s big sob story about cheating on Hope with Steffy. It looks like Wyatt’s going to be shocked by what’s happened, and he’ll call out his brother for having cheated on his wife.

Of course, B&B viewers know that Wyatt tends to be a bit reactive, so after he calls out Liam, he’ll probably calm down a bit.

We might see Wyatt then try to help his brother through this difficult time. Ongoing B&B spoilers indicate that Wyatt will be there to support Liam as Liam deals with this big mess that he’s gotten himself into.

Liam definitely seems like he needs someone to talk to, and he can’t keep pouring his heart out to Hope, as she needs some space right now. Hopefully, Wyatt will offer Liam some comfort.

Thursday’s new episode of B&B is going to be terrific, so be sure to tune in! Remember, we’re here for you with all the latest Bold and the Beautiful spoilers, daily episode recaps, and news. Here at CDL, we’ve got you covered!